So, some liberal has put together a java game that allows you to mow down “Tea-Party zombies”[1].

Good news: Angry liberals can now vicariously hunt down and kill the world’s most dangerous prey. No, not human beings; Tea Party Zombies.

…These zombified targets include “generic pissed off old white guys,” Glenn Beck, a blood-drenched Sarah Palin, and a two-headed Koch brothers creature, among others. Enlightened gamers can choose from a wide array of weapons, including crow bars, crossbows, and firearms, with which to dispatch their living-dead political foes.

You can play the game here[2], but honestly, it’s not very good. Although the graphics are superb for an amateur level online game, the actual gameplay isn’t impressive. Ironically, the gun seemed to fire off to the left of where it was aimed and it was slow, dull, and not challenging enough to stick with for very long.

A lot of conservative bloggers seem to be a little huffy about this, mainly because of the hypocrisy of the Left in lecturing everyone about civility while pumping this crap out. 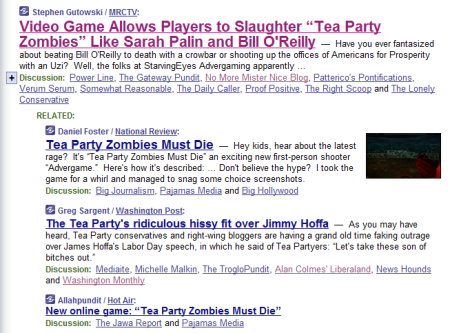 However, my thought was: Would it not be fun to put a game like this out with the Left as bad guys?

You’re one man with a Texas drawl, a shotgun, and a chainsaw fighting armies of hippies, bureaucrats, ACORN zombies, environmental wackos, TSA gropers, and SEIU goons, all of whom are infected with a super rabies virus. Of course, you’d have the big bosses, too — a giant worm with Joe Biden’s head, a Jesse Jackson super zombie who accuses you of being a racist for not letting him eat your brains, and of course, a two headed Barney Frank troll, with a lolling tongue, who wants to help you….to death.

C’mon, there has got to be a conservative game designer out there who wants to put this together. I will promote the hell out of it on all of my blogs and it’s guaranteed to get lots of attention as the counter-point to this game — which even made the Drudge Report[4].

Get in touch and let’s do this!