The Kia dealership general manager Mike Wangle is definitely a patriot[1]. The whole dealership is standing its ground against some bureaucratic fascists in Florida who evidently hate the American flag. They have cooked up some random, stupid code-enforcement violations to try and strong-arm the dealership into taking down the American flags they are displaying for the Fourth of July. Get this, they are not considering them ‘flags.’ You guys need glasses and a brain enema. These Marxist thugs just don’t want anything displayed that shows a love for America or her history. That’s Progressives for you. Fortunately, the Kia dealership has told them to pound sand. And I hear there’s a lot of sand in Florida. 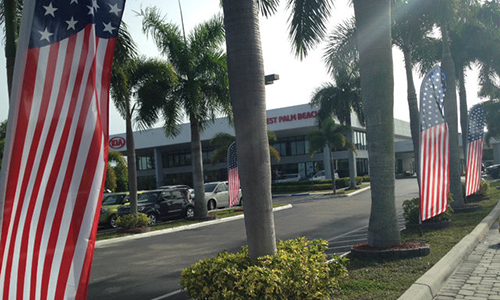 A Florida car dealership is facing fines for displaying its patriotism.

The Kia dealership in West Palm Beach faces penalties of up to $1,000 per day for a code-enforcement violation it received from Palm Beach County for displaying six American flags on its property, WPTV reported[3].

The county said the dealership is violating a that prohibits the display of pennants, balloons, banners and other signs made of lightweight fabric, plastic or similar substances.

The notice said the dealership must remove the flags by the Fourth of July or the fine will be imposed.

“You would think they they would let us leave it up during the Fourth and then say, ‘take them down after the holiday,’” Wangle said.

He told WPTV he understands the code, but doesn’t understand why the flags don’t fall under the flags category.

“I don’t have a problem taking the banners down if we had banners saying ‘we’re open’, or a ‘big sale.’ Those are banners,” he said. “But when you’re displaying the American flag, that’s a little different. That’s why we’re kind of upset about it.”

He added that he will keep the banners flying until July 5 to display patriotism on Independence Day, even if he has to pay the fine himself.

Wangle says those six flags will stay up until the 5th and if he has to, he’ll pay the $1000 fine himself. Now that’s a guy I could have a beer with and call friend. The majority of Americans are proud of their country, their history and their heritage. We love our military and all the really great things about this country including the Constitution. Most of us won’t stand for the way the Marxists are trying to strip us of our rights, rewrite our history and change our culture. Those six flags mean the world to that dealership and to America. Here’s a thought… you Leftists who moved into Florida and now want to spread your intolerant commie ways – why don’t you just go back where you came from? You know, the hell you created on one coast or another. The rest of us will fly our flags and celebrate our Independence Day.