Football Coach Suspended for Praying Fights Back – This Is Huge

You have got to be kidding me.[1] This is such a blatant violation of constitutional rights it defies belief. Joe Kennedy, who is a Christian football coach in Washington state, does a prayer in the middle of the football field after every game. No one is required or enticed to join. It’s not for a specific religion. He’s done this for eight years and the opposing team usually joins in after the game. It’s his way of thanking God, win or lose, for the game. Another coach did a Buddhist prayer and was not suspended, but this Christian coach was. He won’t be coaching for the rest of the season and he is filing a discrimination complaint against the school district. Good for him. 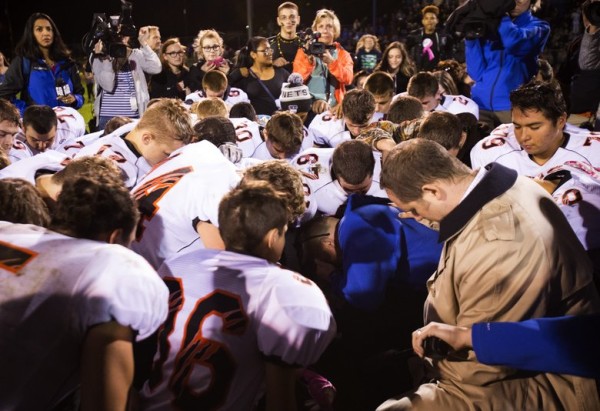 One coach prayed to God. Another coach chanted to Buddha. But only one got punished — the Christian coach.

Joe Kennedy, a beloved assistant football coach in Bremerton, Washington, was suspended on Oct. 28 after he refused to stop his post-game prayers at the 50-yard line.

On Tuesday, he filed a discrimination complaint against the school district, claiming the district did not punish the team’s offensive coordinator for conducting Buddhist chants in a similar manner.

Liberty Institute is representing Coach Kennedy in his discrimination complaint. “BSD violated my rights to free exercise of religion and free speech by prohibiting my private religious expression and taking adverse employment action against me on the basis of my religion, notwithstanding my request for a reasonable accommodation that would allow me to practice my sincerely held religious beliefs,” Kennedy wrote in his complaint. So far, the school district has no comment. “I definitely don’t want to be in this predicament,” said Coach Kennedy. “I just want to coach football with my guys.” For the last eight years he has been commended as a coach and praised. Suddenly this year on his review it says, “Do not rehire. Mr. Kennedy failed to follow district policy and his actions demonstrated a lack of cooperation with administration,” the review alleged. “The subsequent situations contributed to negative relations between parents, students, community members, coaches and the school district.” That is unmitigated bull crap. Kennedy is a Marine, a Christian and a wonderful coach. He’s devastated over this. He defied the school district on prayer and stood on his principles. “It largely has to do with me being a Marine and a veteran — fighting for the constitutional rights of all Americans,” he said. “I still believe in America being home of the free and the brave. I haven’t seen that lately. We constantly back down because someone could be offended. But that’s not the American way. We talk about practicing tolerance and acceptance and diversity yet we are not living up to that. As an American, I can’t sit by and let that happen.” That is what I call character and conviction. I hope he wins.