This is a sad development[1]. But let’s ask actual journalistic-type questions here for a moment using time-place-form-event shall we? Playing Devil’s Advocate – I would like more evidence. Medina did kill his roommate with a sword – he called the police himself. He had a fight with his roommate. I have questions… Why did Medina feel he had to keep a sword by his bedroom door? Did he feel threatened? Was it self defense, because the roommate forced his way into the room where Medina’s girlfriend was with him? Did they feel their lives were in danger? Did the roommate have a weapon? Why $1 million in bail? Is he a flight risk? Is Medina crazy or did he do the sane thing by protecting himself and his girlfriend? 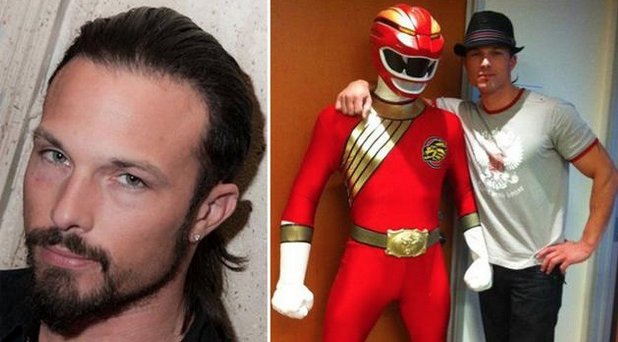 Medina played the Red Lion Wild Force Ranger in 2002, according to IMDB. Sadly, it looks like he completely lost his mind. Apparently he stabbed his roommate with a sword and killed him.

Los Angeles County sheriff’s deputies have arrested Ricardo Medina, Jr., who is best known for his role as the red Power Ranger, in connection with fatally stabbing his roommate with a sword in their Green Valley home.

Medina, 36, was booked for murder at Palmdale Sheriff’s Station. He was being held in lieu of $1 million.

“He is a great friend and a great client. It’s something I can’t even conceive. I don’t see that in him. He was a very helpful guy and great with his dog. It’s such a shock,” said Gar Lester, Medina’s former agent who has known the actor for 12 years.

Los Angeles County sheriff’s deputies said Medina called 911 at about 3:50 p.m. to report the stabbing in his home in the 38000 block of San Francisquito Canyon Road.

Sheriff’s deputies said Medina got into an argument that turned into a physical fight with his roommate Joshua Sutter, 36. Sutter allegedly followed Medina and his girlfriend into their room by forcing the door open. Medina then stabbed Sutter in the abdomen with a sword kept next to the bedroom door.

Sutter was taken to a hospital, where he later died.

Sounds to me like the media is convicting this guy before all the evidence is in and he has had the benefit of a trial. I wonder what the fight was over? I would hope he has a really good lawyer, because in California, the courts are fickle and Liberals have a thing about weapons of any flavor. You can be as guilty as OJ Simpson and go free, or you can be innocent and only guilty of self defense and protecting someone you love and still go to prison for a very long time. Living in a Marxist-controlled state is dicey at best over something like this. I really hope he gets a fair shake. We used to be a nation where you were innocent until proven guilty… now you’re innocent until the press gets a hold of you.