At first I thought this was a really bad idea[1], but this is meant to make a point. The guy who thought this up has cojones. Islamists hate gays and kill them whenever and wherever they can. For some insane reason, many gays support the Islamists. This, I am sure, is meant to illustrate the hate spewing from the Islamic community towards the gay community. Of course the Leftists, gays and Islamists want to outlaw it. It sheds light on a multi-faceted, contradictory political alignment – which the Marxists don’t want and will stop any way they can. The enemy of my enemy and all that. Hope the conservatives go armed as best they can – Sweden doesn’t allow guns to be owned by the civilian population for the most part. This should be intense. 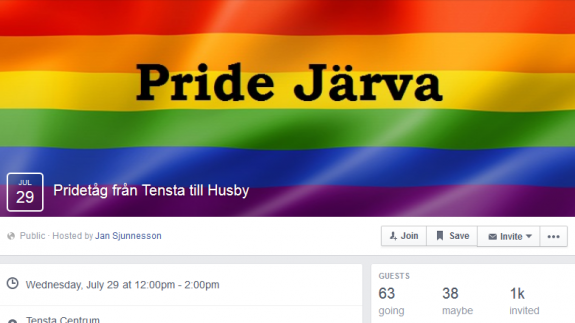 A gay pride parade is scheduled for July 29 through Muslim neighborhoods of Stockholm, Sweden from noon to two PM.
The organizers are already under attack.

No, this is not satire. On July 29, a gay pride parade is scheduled in Sweden. But, you see, this is no ordinary gay pride parade. This gay pride parade was created by Jan Sjunnesson, former editor-in-chief for the Samtiden newspaper in Sweden, which is owned by the nationalist Sweden Democrats party (for our Canadian readers, think of the Sweden Democrats as being kind of like the Conservatives or the Canadian Action Party, which means that they’re considered “extreme far-right” in Sweden). The parade is scheduled to go through Tensta and Husby – two areas where Muslim immigrants are more than 75% of the population.

On the event’s Facebook page[4], the organizers state that there will be public “kissing” and “singing”. 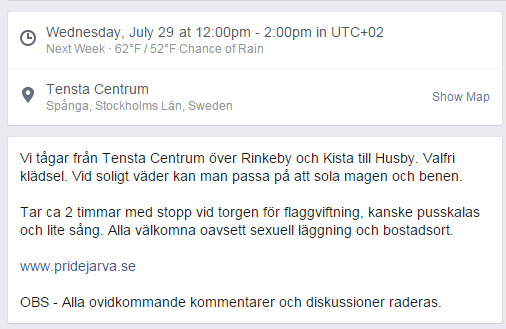 The Facebook page is absolutely filled with angry comments from leftists, attacking the “xenophobic right-wing nationalists” for organizing a gay pride parade through Muslim areas. Since Islam holds that gays should be executed, something like this is obviously an attack on Muslims and should therefore be outlawed. At least, that’s what Swedish leftists – and, indeed, Swedish gays – are saying.

Boy, I can just feel the hate coming from all quarters on this one. Actually, this is a great idea, just very dangerous given the incendiary nature of the Islamic community. Freedom is freedom and Sweden is not supposed to be a Shariah state – although it’s looking more and more like one every day. This confrontation has the potential to be very, very violent and bloody. After all, the area they are marching through is 75% Muslim. Popcorn anyone? This ought to be quite a show – let’s just hope it’s not explosive.