Good riddance… he deserved to be dumped publicly. He snuck around, cheated on her with another woman (at least one) and lied to her. Then when she exposed him for the lying, cheating weasel he is, he basically laughed at her indifferently and acted like he didn’t care. Someday, payback will be a bitch that comes knocking for this cretin. I don’t blame Cassie at all – it was the perfect present that sent a solid message. I just hope her little one did not see it. She deserves better than that loser and is strong and smart enough to realize it.[1] 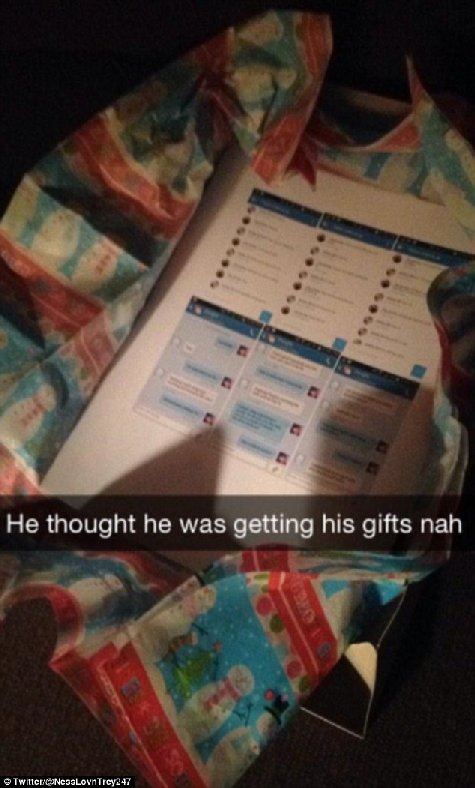 On Christmas morning, her boyfriend was in for a big surprise when he unwrapped the gift and was faced with his infidelity.

A girlfriend served her revenge perfectly wrapped this Christmas after she packaged up print-outs of her cheating boyfriend’s messages to another woman and left them under the tree.

A woman who goes by ‘Cassie’ on Twitter (@NessLovnTrey[3]) and is thought to be American posted pictures of the carefully wrapped present containing the unfaithful messages.

She then posted a series of images, including her supposed cheating boyfriend opening the gift and his confused-looking expression as it slowly dawns on him that he’s been caught out.

However it didn’t appear that her boyfriend (@Bugatti_Boii_) was too bothered after being found out – as he later tweeted in response to his girlfriend’s pictures: ‘@NessLovnTrey247 could’ve mention me I would’ve gladly retweeted it.’

Although the truth of Cassie’s cheating claims have yet to be proven, she appears to be a genuine Twitter user (with 31,000 tweets to her name) and is the mother of a young child.

The Internet shaming of the cheater has spread across the web – being retweeted thousands of times and shared across social media sites.

Although there was lots of support for Cassie, others berated her for sharing about her relationship online.

The twitpics appeared to have been removed from Twitter as of Tuesday afternoon.

It’s not clear whether the couple separated as a result of the surprise Christmas gift – but Cassie’s last tweet on Tuesday simply read: ‘Gone.’

People were chastising her for doing this publicly on Twitter. Why not? He was cheating on her publicly. What’s good for the goose, is good for the two-timing gander here. Let the world know of his infidelity. The story went viral – there are a lot of people misbehaving out there… this one got caught and outed. Looks like they broke up as well, which is a very good thing. If he cheats, he’ll never stop. This was a poignant and classy way of making her point – he can now move on to his greener pastures. That is until the day the tables are turned on this jerk and he deservedly has his heart ripped to shreds. No sympathy here.