Gone in 120 seconds! An incredible video shows the moment a 17-story building in Detroit is reduced to rubble

Come on now… what’s more American and fun than blowing something up? An OCC graduate, Andrea Wilson, got a real thrill by detonating the explosives that took down a building on campus and it only cost her family $8,000. Not sure I would have paid that much to flip the switch, press the button or whatever… but what a rush it would be to implode a highrise like that. Such fun, as brief as it might be. This was a graduation gift Andrea will always remember – it was a blast.[1] 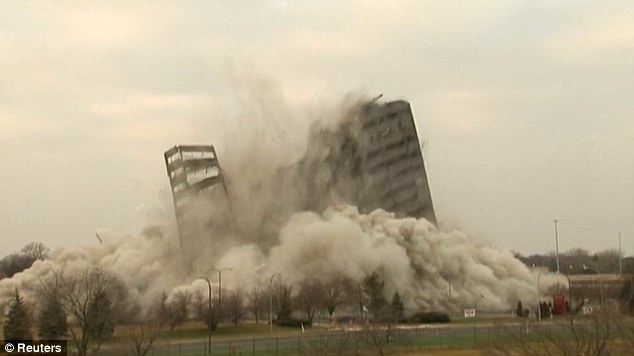 This is the captivating moment that a high-rise building in a Detroit suburb was reduced to a mound of rubble.

Local media report the implosion and collapse in Southfield, Michigan, on the campus of Oakland Community College (OCC), lasted about two minutes.

It temporarily left a thick and billowing cloud of dust cloud hanging over the area.

The right to push the detonation button was auctioned on eBay, with the winning bid of £5,100 ($8,000) placed anonymously by two people.

They in turn awarded the right to recent OCC graduate Andrea Wilson, who said it was the best graduation gift she could ask for.

Ms Wilson told Michigan Live: ‘It’s something I’ll be able to tell my kids one day, that I helped blow up a building.’

‘It was exhilarating. It happened real fast. There were a series of explosions and then it all went down all at once.’

There were a series of mini-explosions that lit the windows of the 17-storey, 250,000-square-foot North Plaza Building, before the final blow.

And in less than two minutes the building was reduced to a pile of rubble.

I lived in Las Vegas for 20 years, where implosions were another excuse for a party and they are something to watch. A little sad, because something historical usually is getting flattened, but still a truly exhilarating event. Of course blowing up a building in Detroit looks like just another neighborhood in Motor City these days, thanks to Progressive leadership. Wilson will indeed tell her children and grandchildren that she helped blow up a building though – it was definitely an event to remember. And if she ever longs for another one to go after, I can think of several in DC that need remodeling.