Governor Abbott is calling for Texans[1] to “stand with law enforcement” on Friday. Officers across the state are asked to turn on their emergency lights at 11 am for 1 minute in memory of Sheriff Darren Goforth. Texans in general are asked to turn on their headlights and emergency flashers as well. Sheriff Goforth was brutally executed last Friday by a black man who walked up behind him as he was putting gas in his patrol car and shot him multiple times in the back of the head and in his back. Then as he lay on the ground in his own blood, the thug emptied the rest of his 15-round clip into him and walked away. Shannon Miles has been arrested now and charged with capital murder. He will almost assuredly get the death penalty. Friday, a nation mourns another fallen hero. This violence must end. 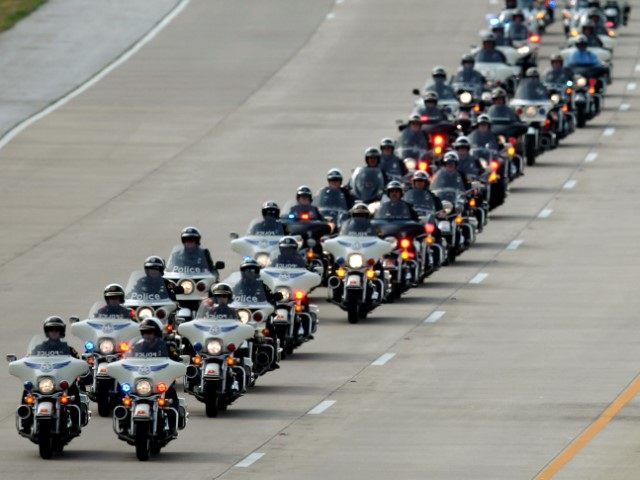 Texas Governor Greg Abbott called for police officers across the state of Texas to honor the funeral of slain Harris County Deputy Sheriff Darren Goforth on Friday. The Governor asks that all police officers across the state “stand with law enforcement” by turning on their emergency lights for one-minute to mark the beginning of the deputy’s funeral being held in Houston.

As Reported By Brietbart:

“Respect and pride in our law enforcement must be restored in this state and nation,” said Governor Abbott in a statement obtained by Breitbart Texas. “It is time to unite in solidarity to support the men and women who serve and protect our communities. I ask that communities across Texas support this cause for unity and remember the essential role that law enforcement plays in keeping Texas safe and strong.”

Abbott announced a procession of law enforcement patrol cars will gather at the north drive of the Texas Capitol on Friday morning as a show of unity.

Lieutenant Governor Dan Patrick[3] joined in Abbott’s call for honoring the fallen deputy. “I challenge all Texans to think about how underappreciated our officers must feel, how dangerous their jobs are, how they leave their families everyday not knowing if they are coming home and more importantly,” Patrick wrote in a statement obtained by Breitbart Texas, “if there is anything you can do to help make their job a little easier.” It’s the little things… you can call officers ‘sir’ or ‘ma’am’ as a sign of respect. You can thank them for all they do when you encounter them. You can pay for their lunch or dinner to show how much you appreciate what they do. You can also give to police charities and volunteer. Thousands will show up for Goforth’s funeral on Friday. But graffiti is now showing up in multiple locations around Houston depicting death to cops. The #BlackLivesMatter movement is also calling for a race war and death to all whites and cops on live radio. As we lay a hero to rest, we now have to fight another war at home against anarchists, racists, radicals, terrorists and Marxists. Pray for our boys and girls in blue… Pray for America.