In case you haven’t noticed, there’s been an ongoing and concerted effort by the left to silence prominent conservatives and remove them from the airwaves. The decision by seven advertisers to pull their ads from Rush Limbaugh’s show,: despite his sincere apology[1], is just the latest example. It’s time to say “Enough!”

Nobody got it more than Andrew Breitbart, who was taken from this world too soon. But he showed us the way, and while he may not be here in body, he’s here in spirit. From now on, every day, I’m going to ask myself “What would Breitbart do[5]?” and so should you. I may not have the means to cover everything he did, but I have a blog and I have a voice and I have a You Tube account. You don’t need a blog. All you need is a camera or a smart phone and an email account. If you find something going on in your community, or tape some outrageous comment by your representative or union goons, or anything else,: contact me[6], I’ll let you know how to get your story out there.

We can also make a stand with our wallets. Tell the progressives you’re not going to take it any more.: Jeffrey Lord provided us with all of the contact information we need[7]: to send the advertisers who dumped Rush a clear message — we are the majority in this country, not the left. Tell them you’ve had enough, and you won’t stand by while the progressives try to destroy another conservative. If it means having our computers backed up by some other company than Carbonite, so be it. Why would we want to spend money supporting a business that: donates to groups hell bent on destroying our way of life: and our children’s future?

Tonight was our sons’ end of season wrestling party. A number of kids dropped out during the season because it’s such a tough sport, and when a kid hits the mat, it’s just him and his opponent — there’s no hiding behind better wrestlers. One of the coaches told our fifth grader that if anybody had an excuse to drop out this year it was him — he was in the toughest weight class of the whole group, and faced opponents who were far more experienced and skilled than he is. The coach praised our son for sticking with it, and explained that the tough competition he faced this year will only make him a better wrestler going forward. The going got tough, and my boy didn’t quit, he kept fighting. I pray he never loses that heart, and carries that fighting spirit with him throughout his life. Because the left will never quit, and we need to teach our children that they will need to constantly fight and remain vigilant if they want any hope of preserving their freedoms that are eroding as I type this.

I’ve had my website hacked, had to switch servers on more than one occasion, been attacked and ridiculed by trolls in the comments, gotten by with little sleep on more days than I want to count, and spent a great deal of money and time keeping my blog up and running. But I don’t care and I’ll never quit. I have two little boys and I don’t want them growing up in the left’s version of utopia, because if they get their way it will be hell on earth. History has proven it time and again — : in the USSR, in North Korea, in Cuba, and in the killing fields of Cambodia, to name just a few — everywhere the communists have held power they’ve brought suffering, misery and death to millions of innocents. And this is how they do it — by destroying good people, by using propaganda and the politics of envy and division.

Don’t just sit there.: Fight[8]! As long as I have breath in my body I’ll be right here fighting with you, and maybe: I’ll be wearing a t-shirt[9]: bearing the image of: one of the fiercest fighters for our cause[10]: during my lifetime. 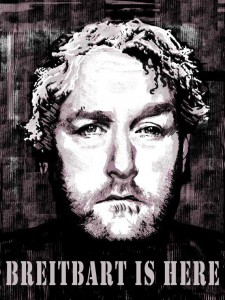 Now I’m going to go kiss my boys goodnight, and say a prayer that we will prevail.

(If you purchase a t-shirt through the link above, proceeds will be donated to the Breitbart family, as noted at: I Own the World[12].)

Update: Another way you can fight is to stop spending your on the movies and the DVD’s that benefit the people who loathe you.: Read this post[13]: by Daniel Knauf, and start spending your entertainment dollars wisely. Stop feeding the beasts who only believe freedom of speech is for them and not for you, or Rush Limbaugh, or Glenn Beck, or any conservative looking to make a career in Hollywood. If the 80% of Americans who are not far left progressives did that one simple thing, well, just imagine the impact it would have.

Cross posted from The Lonely Conservative[14]