Watching this video made me catch my breath[1]. That speeding car came sooo close to killing all three children it is chilling. They were going incredibly fast. The poor kids were stunned and then scared to death. You can tell they couldn’t decide whether to continue into the bus or go back. I don’t blame them. Someone needs to catch that asshat and put them away. 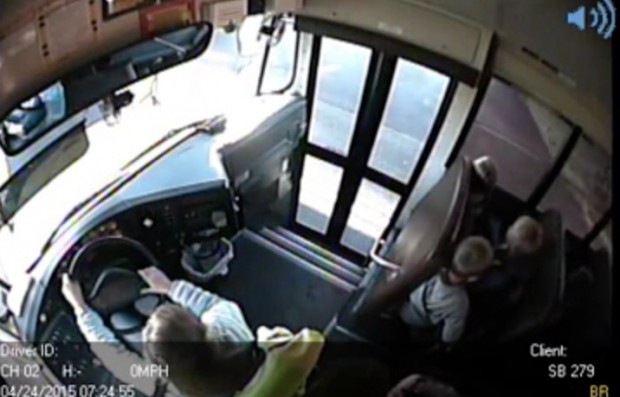 Heart-stopping video taken from a school bus surveillance system in Washington state showed a driver speed past the bus’ flashing lights and come within inches of running over three kids.

“I looked up and the car passed by the kids and my heart almost dropped,” witness Lisa Razo told KING-TV[2].

5-year-old Charity Wolf, one of the children seen in the video, told KOMO-TV[3] she thinks the vehicle brushed her shoes as it zoomed by.

“It kind of ran over my shoe a little,” she said.

Witnesses said that the vehicle maneuvered around several other cars stopped behind the bus before passing it. The bus had its lights flashing, making it illegal for a driver to pass it.

Razo told KOMO about the reactions of the children.

“They were just shell-shocked,” she said. “So were we. Her son was crying.”

Parents are now on the lookout for the vehicle, described as an older white SUV with chrome wheels.

I hope they track that driver down and fast. This would make your heart skip a beat and almost stop if you were watching your child come that close to getting flattened while getting on the school bus. Nothing and I mean nothing is sooo important that you don’t stop for a school bus. You can bet those parents will be looking for that driver. Even if the children had looked both ways, the driver was going so fast they wouldn’t have seen him/her probably until it was too late. Surely some camera caught that car and possibly the plate on it. Those children had an angel on their shoulders and were very, very lucky. This almost ended very tragically.