Here’s What Peyton Manning Did Immediately After the Super Bowl

The first thing Peyton Manning did[1] after winning the Superbowl on Sunday was to thank God. He’s a Christian and a man of faith. He has won Superbowls with both the Denver Broncos and the Indianapolis Colts. When asked if this would be his last game, Manning had this to say: “You know, I’ll take some time to reflect,” he said. “I’ve got a couple priorities first. I want to kiss my wife and kids. I want to hug my family. I’m going to drink a lot of Budweiser tonight, Tracy. I promise you that. I’m going to take care of those things first. Then I’m going to say a little prayer and thank the man upstairs for this opportunity.” Many consider his prohibited mention of the brand ‘Budweiser’ as an indication he is retiring. He will be missed and I hate to see him go, but other adventures await him I imagine. 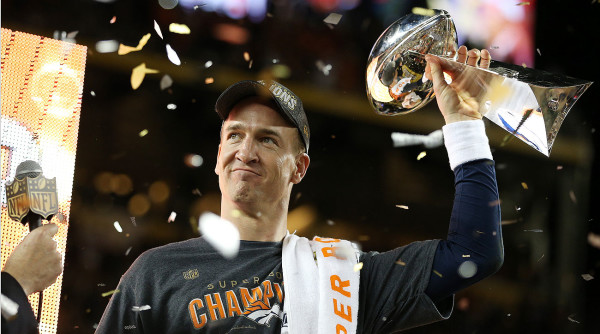 Denver Broncos quarterback Peyton Manning brought his faith to the foreground Sunday in a post-Super Bowl interview in which his future plans remained uncertain.

“I’m going to say a prayer and thank the man upstairs,” Manning told interviewer Tracy Wolfson of CBS shortly after Denver defeated the Carolina Panthers 24-10 to cap what many have expected will be the final season for the 39-year-old quarterback who has now won Super Bowls with both The Broncos and the Indianapolis Colts.

Wolfson asked Manning about his career.

Contrary to what some of these people say, hypocritically, I might add, you can be a Christian and drink beer. You can also drink wine. Just not in excess. “Christians drink beer. So do non-Christians. Christians also make mistakes, just as non-Christians do. My faith doesn’t make me perfect, it makes me forgiven,” Manning wrote in his book. Manning has been a Christian since he was 13. He just doesn’t go on about it as some do. He lives his life based on his faith, just as his father did. Peyton Manning says he’s “very much at peace” as he contemplates retirement from the NFL. He’s a good man, an incredible athlete, a great father and will be missed greatly by his teammates if he does decide to call it a day. He was simply awesome yesterday and did not disappoint his fans.