High-Speed Chase on a Texas Freeway Takes an Unexpected Turn When 2 Suspects Try to… Outjump Police Over a Wall? [Video]

I doubt these geniuses knew they were jumping off a 20 foot wall[1] when they went over, but they didn’t get hurt. Fool’s luck. If I understand correctly, there were four of them in the van. Two just waited for the cops to take them into custody. The other two jumped out while the van was rolling to a stop after a high-speed chase. Then they took the jump of their lives. They ran for a building to hide, but got caught any way. Way to go boys – crazy enough to take a leap that could of killed you – not smart enough to evade the police. Typical[2]. 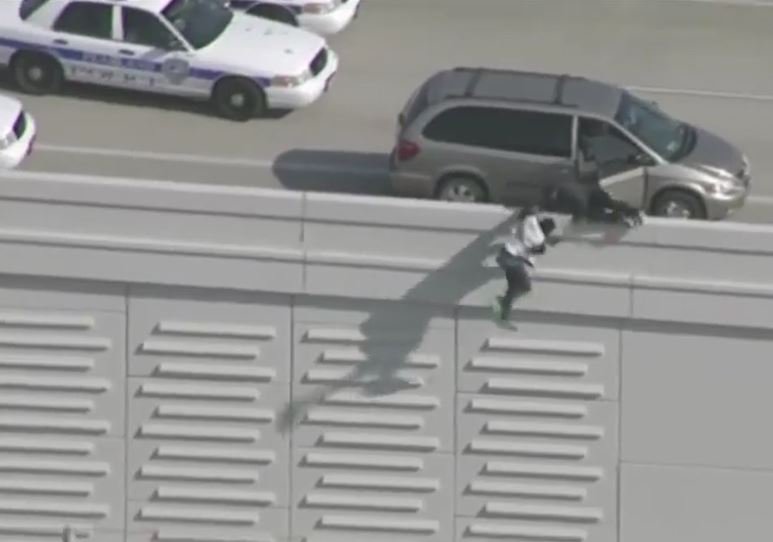 On Thursday, Houston police[3] were in hot pursuit of a minivan for about half an hour.

While most suspects tend to keep their foot on the gas when in pursuit by several cop cars, these guys stop the minivan on the freeway. Next thing you know, they’re crawling out of the vehicle. But it’s not to surrender to the authorities.

Neither appears to be injured, after what most people would consider a bone-breaking plunge. Then, they take off running again.

Hoping to evade law enforcement, the suspects attempted to get into a nearby building. However, it appears that was when the would-be escape artists ran out of tricks. Authorities showed up and took them into custody.

As one quick-witted commenter pointed out, black lives matter except when they are trying to flee a crime scene. They tried to get into the building they were skirting to hide out in, but a security guard turned them away. Guess they didn’t say ‘pretty please.’ At the end of the ordeal, one was cuffed in the squad car and the other was unconscious on the ground. Maybe it was from banging his head because he’s a moron. Or maybe he got too frisky with the officers. Both of them needs some sense knocked into them. Dumb and dumber are now on their way to the klink where getting knocked around is foreplay.