This withers the soul.[1] In my years of writing since 9/11, I have seen countless horrific things that just make you cringe and look away, but this is in a class all by itself. This child drew a picture of ISIS forcing a woman to kill her children and eat them. Horror doesn’t quite do it justice. I can only believe she did it to save her other children, because I would gladly die before I would allow monsters like this to force me into doing something so evil. These Yazidi children will never be the same – those that survive that is. The US has not helped them at all… we have left them to the savage care of demons who stalk the earth. I can tolerate many things, but this makes my stomach roil and sickens my very being. 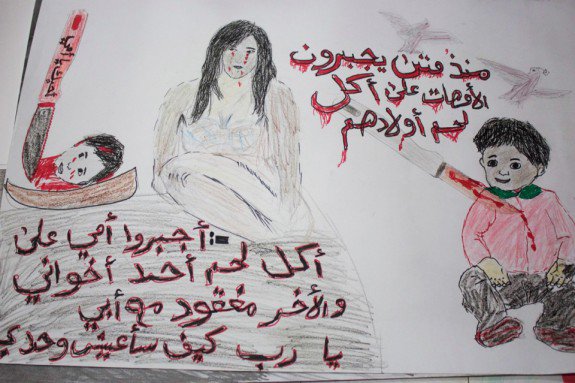 A traumatized Yazidi child displaced by ISIS drew this sketch of his mother.

The woman was forced to kill and eat her own children.

The text at the bottom reads: “They made my mother eat the ‘meat’ of one of my siblings, and the other [sibling] is lost. ‘My lord,’ how will I live all alone?”

These are images children should never have to see.

The horrors of ISIS captured in the drawings by children[3]:

Dozens of children, bundled in sweaters against a winter chill, sprawled on a patch of grass in their camp for displaced people and studiously began to draw. The kids, some as young as 6, drew pictures of beheadings or shackled women or their families running, with armed men at their heels.

The children fled when the Islamic State of Iraq and the Levent (ISIL) advanced on their villages last summer, with most of them witnessing their parents killed or captured along the way. Some of the children were also captured and held as slaves. Now living in a camp as battles rage in the villages they fled, they are haunted by the horrors they have seen.

Their caretakers do the best they can to comfort them but know the children’s psychological wounds are deep and far beyond their levels of expertise.

There are things in this world you can never un-see. These are the most evil of monsters. A woman last week was forced to dance for several of these devils – a Muslim woman. They then raped her over and over and then cut off her head. Just for the fun of it. They thought it was funny. That is the depth of evil and vileness we are facing here. If they can wantonly rape, torture and murder women and children, just think what they will do on a massive scale here in the US if they get the chance. Say a prayer for the Yazidis and these children. The Caliphate and the capering damned march on and Obama does nothing as the world slides into a monstrous dark age. 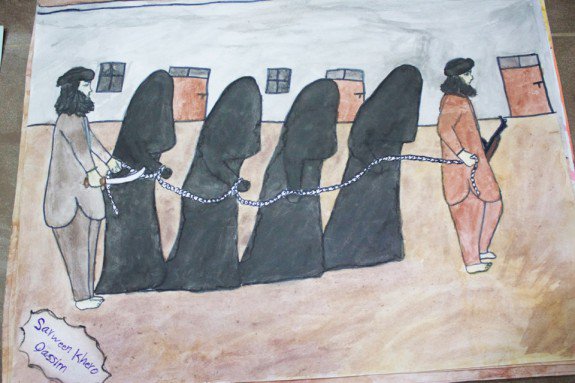 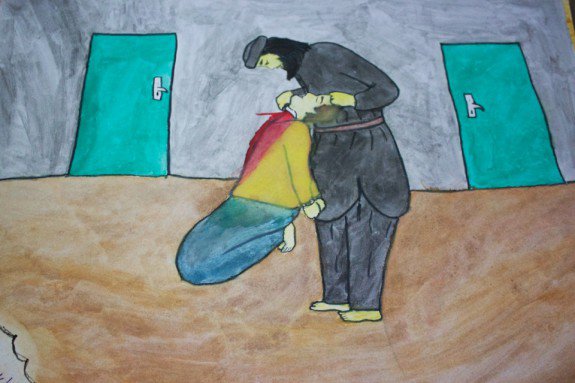