There was little doubt[1] this could end any other way than it did. A guy evades the police in a car chase – probably with a stolen car. He crashes into one car and then hits another, knocking it into yet another. Gets out… and reaches behind the seat for something after hopping out. What do you think the police are going to do? They shot him on live TV and that’s exactly what they should have done. They then covered him with a white sheet out of deference to onlookers. One more criminal bites the dust because he has the IQ of a gnat. No great loss. 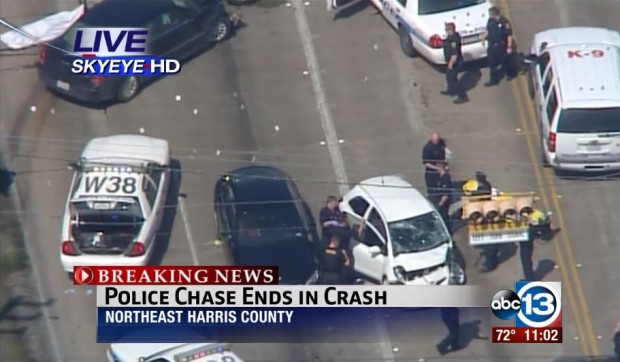 The Harris County Sheriff’s Office confirmed that the suspect died after the chase with the Houston Police Department, which was being covered live on local television.

News helicopters showed a white sheet was placed over the suspect’s body after the shooting.

According to Houston’s ABC 13, the incident began as a traffic stop, which turned into a chase that lasted about 30 minutes. The chase ended after the suspect’s car rammed two other cars head-on. The driver exited his vehicle, then appeared to reach back into his car, when officers opened fire.

The Harris County Sheriff’s Office will take the lead on the shooting investigation because it ended in east Harris County.

I wonder if anyone in the vehicles that were hit were injured or killed. Of course, the media doesn’t care about them. Look at the resistor fighting the bad police officers! They had the nerve to shoot him! What did they think the police would do? Give him diversity training? The police shot to stop a threat and it just so happened that death stopped this particular threat. And yet, there are those out there calling the police murderers. I for one am very grateful the boys and girls in blue take on these threats and protect the rest of us. That was excellent police work there in Houston and the film should serve as a deterrent to criminals.