‘I can’t forgive you’: The tense moment a terminally ill man, 65, who spent 30 years on death row for a murder he didn’t commit, met the former prosecutor who put him there [Video]

An apology a lifetime later[1] somehow doesn’t quite cut it. Sounds to me as though Mr. Ford was convicted on the flimsiest of evidence. He was a winning notch in Stroud’s belt as District Attorney. And I’m sorry, using the excuse that it was an all white jury and that Ford was black really doesn’t cut it. Ford was the most convenient one to blame, so they let him take the fall. His two sons grew up without a father and now he’s dying – and Stroud brings Nightline by to apologize. It smells of insincere grandstanding. 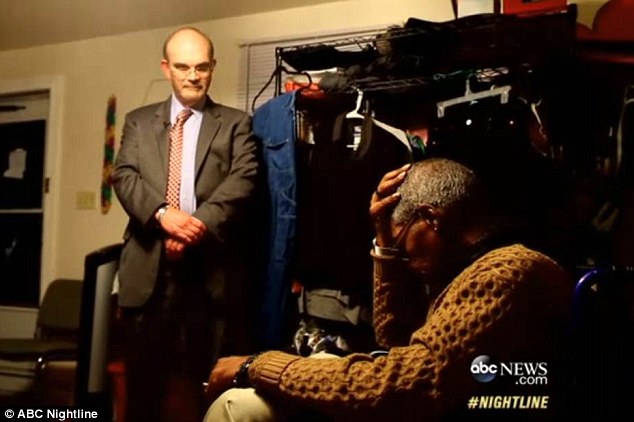 Marty Stroud, left, visited Glenn Ford, right, at his home to apologize for
putting him behind bars for 30 years for a murder he didn’t commit. Ford was released
from prison in Angola last year.

An innocent man who spent more than 30 years on death row for a murder he didn’t commit has come face-to-face with the prosecutor who put him there.

Glenn Ford, who was diagnosed with stage four lung cancer after his release last year, was too weak to stand when Marty Stroud walked into his Louisiana home last week but shook his hand.

‘I want you to know that I am very sorry,’ Stroud said during the somber meeting, which was filmed by Nightline[2]. ‘It’s a stain on me that will be with me until I go to my grave.’

‘Right,’ Ford responded, without looking up. ‘But it still cost me 31 years of my life and then nothing at the end but death because they give me from six to eight months to live.’

Stroud, who wished Ford the best before leaving the home, had asked to meet the man after apologizing to him in a powerful letter published in The Shreveport Times[3] last month.

In the letter, Stroud admitted that he was to blame for mistakenly putting Ford behind bars for the fatal shooting of a jeweler, despite no murder weapon or witnesses placing him at the scene.

‘In 1984, I was 33 years old,’ he wrote. ‘I was arrogant, judgmental, narcissistic and very full of myself. I was not as interested in justice as I was in winning.’

Stroud, 63, wrote the letter after the state ruled that Ford was not entitled to receive $330,000 in compensation for his time spent behind bars because he could not prove he did not know about the killing before it was carried out.

Ford was accused of shooting Isadore Rozeman, a Shreveport jeweler and watchmaker for whom Mr Ford had done occasional yard work, in 1983 and was convicted the following year.

From behind bars, Ford continued to protest his innocence.

Then in 2013, State District Judge Ramona Emanuel voided the conviction and sentence based on an informant claiming that another man, Jake Robinson, had confessed to killing Rozeman.

Robinson, along with his brother Henry, had been eyed by investigators in relation to the killing but have never been charged in Rozeman’s death. They have since been indicted in other murders.

‘My fault was that I was too passive,’ Stroud said in his letter last month. ‘Had I been more inquisitive, perhaps the evidence would have come to light years ago…

‘I did not hide evidence, I simply did not seriously consider that sufficient information may have been out there that could have led to a different conclusion. And that omission is on me.’

He added that the odds were stacked against Ford, whose attorneys were inexperienced in criminal law. Ford, who is black, also faced an all-white jury.

‘I apologize to Glenn Ford for all the misery I have caused him and his family,’ Stroud wrote. ‘I apologize to the family of Mr. Rozeman for giving them the false hope of some closure.’

Ford walked free from Louisiana State Penitentiary in Angola on March 11, 2014, wearing a jean jacket, sweater and beanie hat and carrying all of his worldly possessions in two tiny boxes.

Prison officials gave the then-64-year-old a debit card worth just $20. That, along with the money that he had in his bank account, left Mr Ford with a paltry $20.24 to his name.

His lawyers set up an Amazon wishlist for strangers to donate funds and items – from furniture to clothing – so Ford could start to re-build his life, and he continues to accept donations[4].

With the help of a non-profit group, Resurrection After Exoneration, he had a place to live free of charge and has since moved to his own apartment. He relies on Social Security disability and food stamps, while volunteers help to take care of him. He has also visited California to see his four sons.

So, Louisiana wouldn’t pony up the $330,000 for Mr. Ford after wrongly imprisoning him for 30 years. They made the specious claim that he could have known about the murder before it happened. What a load of crap. Ford’s lawyers have set up a donation site, but it is just reprehensible that the state of Louisiana is not compensating this man for what they did to him. It’s a disgrace and I would hope that Bobby Jindal would step in to rectify this travesty of justice if he can. They gave him a debit card with $20 on it when they let him go. You took this man’s life, then put him on the street with nothing – Louisiana, you should be ashamed of yourself, just as Stroud is.