If Only Men Were Faithful As Women….Oh Wait, They Are!

The lovely and talented S.E. Cupp and the ugly and irritating New York Times managed to hit on the same topic — poor, poor women who have to deal with cheating men!

First, from the New York Times[1];

There was a collective rolling of the eyes and a distinct sense of “Here we go again” among the women of the House of Representatives last week when yet another male politician, Representative Anthony D. Weiner, confessed his “terrible mistakes” and declared himself “deeply sorry for the pain” he had caused in sexual escapades so adolescent as to almost seem laughable.

“I’m telling you,” said Representative Candice Miller, a Michigan Republican, “every time one of these sex scandals goes, we just look at each other, like, ‘What is it with these guys? Don’t they think they’re going to get caught?’ ”

Ms. Miller’s question raises an intriguing point: Female politicians rarely get caught up in sex scandals. Women in elective office have not, for instance, blubbered about Argentine soul mates (see: Sanford, Mark); been captured on federal wiretaps arranging to meet high-priced call girls (Spitzer, Eliot); resigned in disgrace after their parents paid $96,000 to a paramour’s spouse (Ensign, John) or, as in the case of Mr. Weiner, blasted lewd self-portraits into cyberspace.

…And so, despite great inroads made by women, politics is still overwhelmingly a man’s game. Data compiled by Rutgers shows women currently hold 16.6 percent of the 535 seats in Congress and 23.5 percent of the seats in state legislatures. There are 6 female governors; of the 100 big-city mayors, 8 are women.

If there are at least 4 times as many men in politics as women, then doesn’t it make sense that there are going to be a lot more sex scandals involving men?

Rather than working ourselves up with surprise, outrage and disgust every time the predictable thing happens, it’s well past time to admit the plain truth: Men are hardwired to take tremendous risks for sex or the promise of sex, or something even cheaper and quicker. So it has always been, so it will always be.

Especially men in positions of power.

…Does this mean that women should give up on men being decent and faithful husbands? No. But after thousands upon thousands of years of human history, we probably ought to, let’s say, adjust our expectations.

Nor should we let ourselves off the hook. Women cheat and get in trouble too. We get distracted by our passions. But, let’s be honest, it seems to happen a lot less, at least to high-profile members of the fairer sex. Maybe that’s because women are so seldom in positions of official power. Once we do arrive, we are desperate to stay. Desperation and gratitude can go a long way.

Not so of men. As long as there is power to be had, and as long as there is testosterone, men will do stupid things for sex. Anthony Weiner might be the latest idiot to let his libido get the best of him. But then again, the history of mankind was written by idiots.

Whom do women imagine these guys cheat with? Sure, there’s a Mark Foley that comes along now and again, but most of these men are cheating with women — women who apparently have no ethical problems committing adultery with a married man.

This is a weird quirk in the way that we look at these sex scandals. Take the Anthony Weiner scandal. We feel sorry for Huma, which is appropriate. We condemn Anthony Weiner’s behavior, which is appropriate. But, how about all the women who apparently had no qualms about having phone sex or cybersex with a married man? If you consider what Weiner did to be adultery, there appear to be a half dozen women out there who were happy to commit adultery with him.

This is worth noting because what S.E. and the New York Times are REALLY DOING here is using Weiner to play the “all men are dogs” card in a slightly different way. That’s what S.E. is driving at with this line.

…Does this mean that women should give up on men being decent and faithful husbands? No. But after thousands upon thousands of years of human history, we probably ought to, let’s say, adjust our expectations.

Yet, when you actually look at the numbers, as you’d expect (or, at least as I’d expect), roughly the same number of men and women are cheating. Here’s more from Helen Fisher’s work[3].

For a long time, Dr. Fisher explains, adultery was a man’s game. That’s because women depended on their husband for their livelihood and support; if they strayed from the marital bed, they might lose that security. (In previous hunting and gathering societies, where both genders contributed more equally to the family, women were more likely to cheat.)

The modernized economy has changed the stats. Recent surveys show that for those under 40, adultery rates are the same for men and women. “Now, as women are piling back in the job market and regaining what they have lost — economic power — they are expressing their sexuality,” Dr. Fisher says. “They can risk it.”

So, if men are Jack Russells, then let’s be honest enough to point out that women are Poodles.

PS: Let me also add that the focus on “powerful” people is a bit deceptive because sexual power is different for men and women. For a man, having money and status is “power” because it gives you lots of options. In other words, if you’re a congressman, a senator, or a millionaire businessman, you will have women throwing themselves at you and if you get tired of your partner, you probably won’t have trouble getting someone who wants to be a replacement. That’s real relationship “power.”

So, the real relationship female power equivalent of Anthony Weiner isn’t say, Virginia Foxx or Nancy Pelosi. Actually, real power on the romantic front for a woman is looking like this. 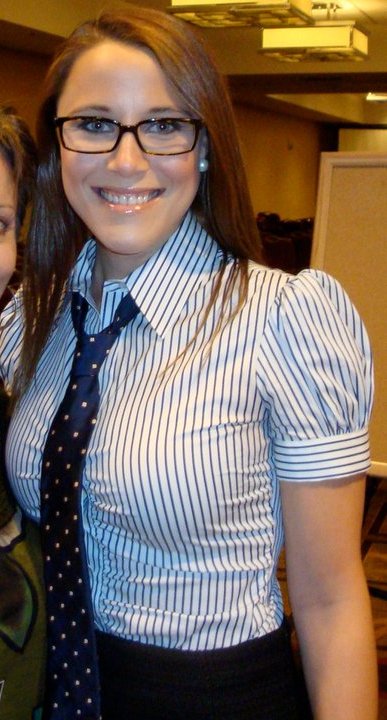 If we’re going to compare men and woman on the power front, let’s at least make it a fair comparison.