If You See Snow on Top of a Car, Get Away FAST. Here’s Proof That You Can Die

There have been many times[1] while driving in the Northwest where I have wondered what would happen if a huge pile of snow and ice on top of a car suddenly dislodged and flew backwards into my windshield. Now I know and it isn’t good. A driver in Massachusetts named Jeffrey Cote was just driving along on a highway listening to a report on ISIS when the unthinkable happened. He got it on video through his dash cam. He had the dash cam installed for his own protection in case an accident was ever caused by someone else that he was involved in. Looks like that was a good call. I don’t know how he stayed so calm through all of it or how he got off that highway without an incident. 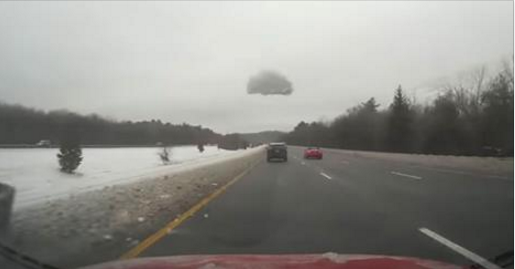 While driving on the highway listening to a news report about ISIS,[3] a driver experiencing the worst-case scenario when an ice sheet flies off another vehicle and slams into his windshield.

While driving on highway I-495, Jeffrey Cote uploaded the video taken on his dash cam[4] that depicts the moment the ice sheets slams into his windshield shattering it to pieces.

At first, Cote thought the ice sheet was going to hit the ground in front of his car. So he didn’t bother trying to dodge the projectile.

The mechanical engineer is fine and lived to tell his tale. It could have ended much, much worse. Something like this tends to ruin your whole day. Unfortunately, his dash cam did not give a shot of the SUV’s license plate. Bummer. Jeffrey Cote is now warning everyone to clear snow and ice off the top of their cars so no one else gets hurt or killed. Sound advice. Living where there is lots of snow, it has always been a habit in my family to clear off the top of our vehicles, as well as the windows before driving off. Getting lazy and just figuring it will melt could turn deadly.