What an incredible find![1] The University of Virginia just found a hidden chemistry lab in their Rotunda during a renovation. They believe it to be Thomas Jefferson’s lab. He also designed the building. The pictures are fascinating. It is basically a hearth that was used in conjunction with a nearby chemistry classroom. This is an historic find that gives a glimpse of how science worked in the early 1800s. The university was truly surprised at the find and the significance of it is beyond their wildest dreams. Just when you think everything that could be found has been uncovered, something like this is brought to light. It reminds me of Nicolas Cage in National Treasure.

Thomas Jefferson created this specialty chemistry hearth for new experiments when he designed the University of Virginia rotunda.

A hidden chemistry lab has been found in the iconic Rotunda at the University of Virginia, and the room likely has a direct link to the third U.S. president, Thomas Jefferson, who designed the building, school officials said.

While hidden for decades, the lab isn’t exactly a case of a founding father’s version of “Breaking Bad.” The lab appears to be a specially designed hearth created to be used with a nearby chemistry classroom, when the university was first built in the 1820s, officials said.

The room was likely designed after Jefferson collaborated with the first natural history professor at the school, John Emmet, according to Brian Hogg, senior historic preservation planner in the Office of the Architect for the University of Virginia

“It was a surprise, a very exciting one for us,” Hogg said in an article published this week on the University of Virginia website[3].

Constructed sometime between 1822 and 1826, the hearth was walled off in 1850 and survived a major fire that destroyed much of the building in 1895, according to the University of Virginia website. It was discovered during an ongoing two-year renovation of the building.

While cutting edge for its time, the hearth is far different from anything seen in a modern chemistry lab. Special flues carried out toxic air and heated sand was used to disperse and temper the heat instead of just turning down a knob.

Anyone eager to see the hidden room will have a chance after renovations are completed and the room becomes part of the permanent display, officials said.

“This may be the oldest intact example of early chemical education in this country,” Hogg said on the University of Virginia website.

I would love to go see this hidden room. It’s living history. In Thomas Jefferson’s original Rotunda, the teaching of chemistry occurred on the Rotunda’s bottom floor – laboratory experiments and demonstrations in the Lower East Oval Room and lectures in the Lower West Oval Room. John Emmet, the first professor of natural history, who collaborated with University founder Thomas Jefferson to equip the space, taught the classes. The chemical hearth was built as a semi-circular niche in the north end of the Lower East Oval Room. Two fireboxes provided heat (one burning wood for fuel, the other burning coal), underground brick tunnels fed fresh air to fireboxes and workstations, and flues carried away the fumes and smoke. Students worked at five workstations cut into stone countertops. Brian Hogg, senior historic preservation planner in the Office of the Architect for the University, said the chemical hearth may have been for Emmet’s use; the students may have had portable hearths with which they conducted experiments. I find this fascinating and exciting – the University of Virginia is about to get even more popular! 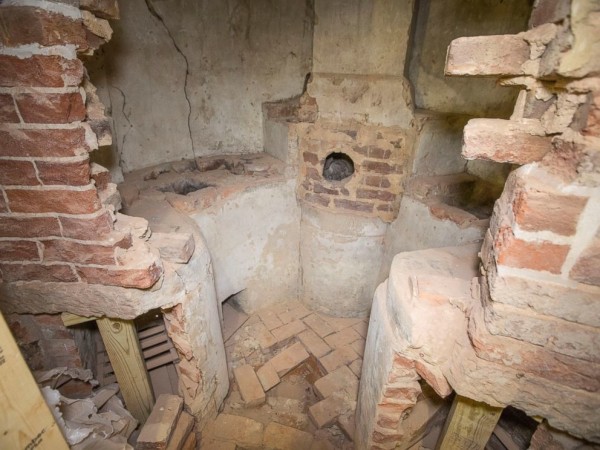 The room has been walled off since 1850 and was only fully discovered during current renovations by chance. 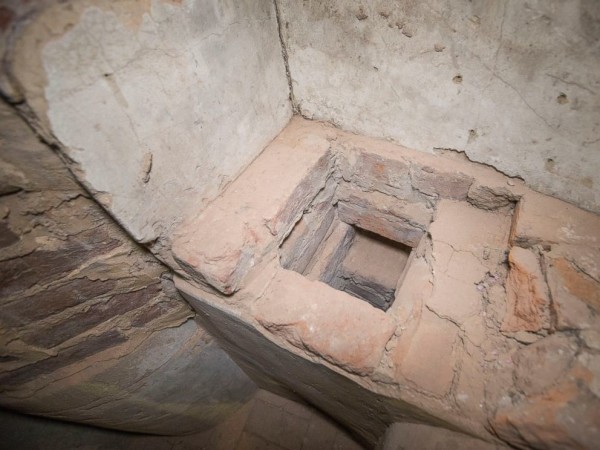 The hearth is far different from any kind of modern chemistry lab with special flues taking out toxic air and sand used to change the heat used in experiments.