This is brutal. Yep, the black guy is a thug and he begged for a beating, but this is just hard to watch. The black guy is from New York and picked a fight with a trucker in Arizona. It did not end well for him. I actually thought the guy was going to beat him to death. Not pretty. 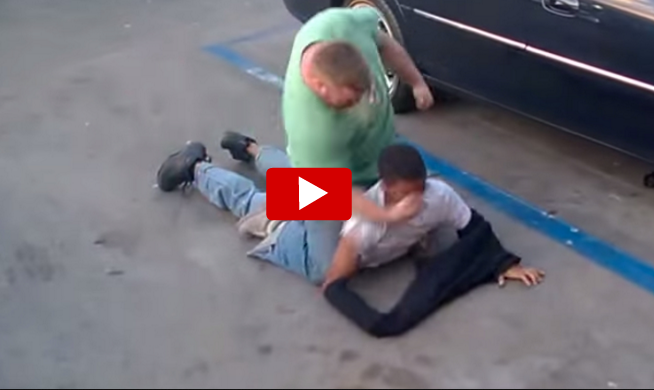 Fight at gas station in Arizona between loud mouth guy from New York and a couple of truck drivers.

The New Yorker took on two guys, each twice as big as he was. He mouthed off at them and egged them on. He calls the guys foul names and other crap I won’t repeat here. You’ll just have to watch it for yourself. Mouthing off got the guy a beat down that he’ll never forget I wager. The moron takes a swing or two at one of the big guys and the trucker happily complies by taking the guy down and walloping him into the pavement where he stayed… dazed, confused and bloody. I do not approve of violence like this. There is a case to be made that the guy was protecting himself. However, I think he went just a bit far in beating the idiot senseless. It’s a tough lesson learned a very hard way if you ask me.