Garden Gnome World[1] seems to be exactly what it sounds like: A place to buy Garden Gnomes for people who are into that sort of thing.

But, they may have accidentally stepped in it by trying to create a cutesy President Obama Garden Gnome[2]. I’m sure it’s a perfectly innocent attempt to create a kitschy little Garden Gnome that might appeal to fans of the President — and it is cute in its own little way. I mean, I’m not a fan of Garden Gnomes, but if they had a Ronald Reagan or Sarah Palin Garden Gnome, even I might consider buying one as a gift.

Unfortunately, liberals tend not to have much of a sense of humor about this sort of thing and I actually discovered this from a liberal post on G+, where they were getting outrageously outraged about what a racist item this was. Why? Well, because that’s WHAT THEY DO. 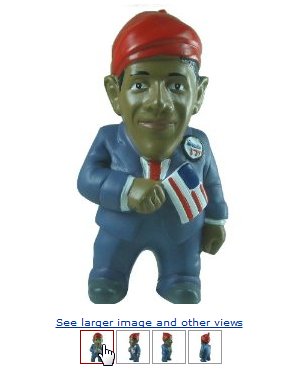 Will build consensus with all your other gnomes
Sports a flag and pin — YAY!
Rocks a blue suit with red power tie
Did I mention the power tie?
WOW he has a FLAG

Plus, it probably reminds liberals of this… 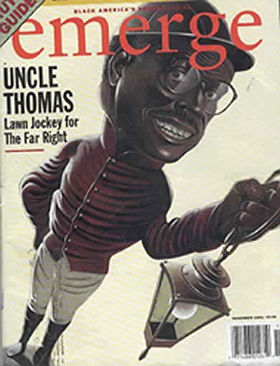 ….and as we all know, some company innocently creating a non-racist image meant to celebrate the President is much more of an issue to liberals than liberals deliberately using racist imagery to insult black conservatives.

PS: If you have a liberal friend who likes Garden Gnomes and has a birthday coming up, well, let’s just say you might want to get one of these gnomes now before Al Sharpton gets wind of their existence and MSNBC starts calling for everyone at Garden Gnome World to be arrested for hate crimes.