Is Wedding ‘Uninvitation’ to a Groom’s Parents Hilarious, Or Proof He’s a Big Jerk? You Decide…

So, today social media is going gaga over an “uninvitation” that a groom named Alex and his wife Alyssa sent to her parents telling them they weren’t welcome at this wedding. Many are celebrating this girl’s act saying it somehow served her mean parents right. But should we celebrate this? Is this a funny thing this bride did or is it proof that she is a whiney jerk? 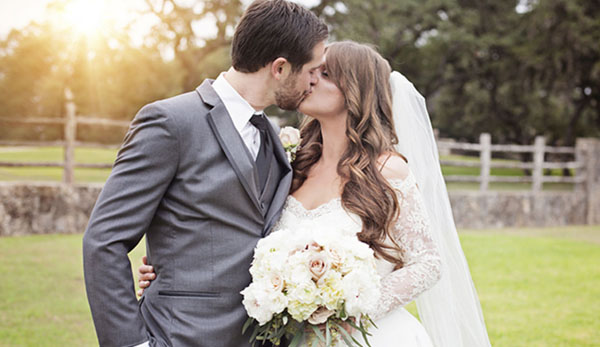 Not long ago a Reddit user[1] named Skitzocat (this name is your first clue) posted a scan of the “uninvitation” they sent to the parents she apparently hates so much informing them they aren’t welcome at their wedding.

Together with our friends and families, Alex and Alyssa, would like to invite you to suck it and bask in our happiness, your bitterness and our mutual irritation at each other’s existence, as we completely ignore yours and celebrate our marriage without you.

There will be a lovely ceremony, followed by cake, food and general merriment. And you’re not invited to any of it. Because f*** you that’s why. 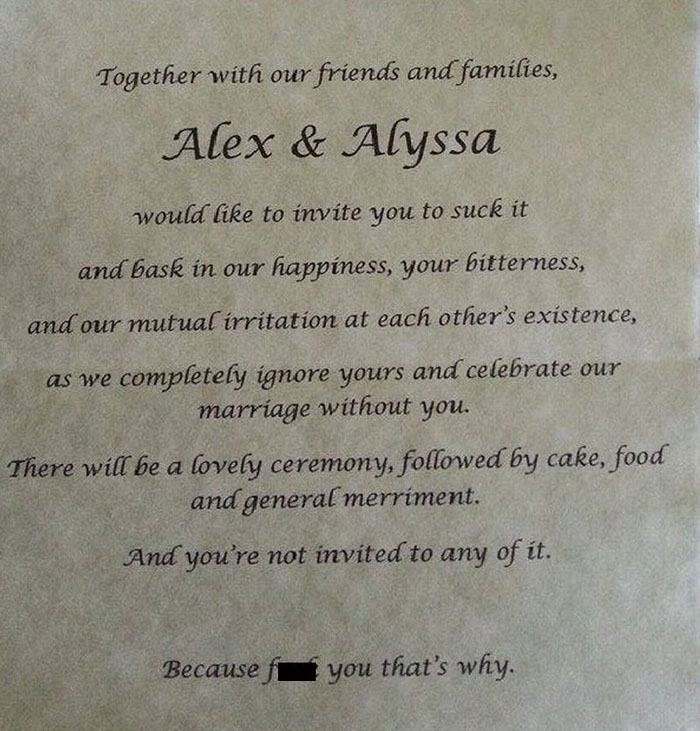 In the Reddit thread she “explained” why she hates her parents and why they deserved this treatment.

So my narcissistic parents abused me for 16 years before I ran away from home. Now they’re trying to bully their way (via family, they haven’t bothered to speak to me personally) into getting an invitation to my wedding. There was really only one way to respond.

Backstory: so my parents have been harassing me via my grandparents about getting their expected invitation to my wedding. OP: [http://www.reddit.com/r/raisedbynarcissists/comments/2f819r/parents_demanding_a_wedding_invite/]

Update: I got a text today from my grandparents asking me to come up and see them about something important. I think we can all guess what it was. So I went up there braced for a full-out argument, which has happened every other time I’ve done something my Nparents don’t like. I had prepared everything that I wanted to say, thought about the calm but firm voice that I would say it in and everything.

I sat down and my Pop handed me his phone with a text open from my Nfather. It went something like Our relationship is now irreconcilable. If you keep harassing my family I will take out a court order to protect them. I don’t want to see you again near my business/house/family I love how I’m not included in that ‘his family’. Oh well.

So I sat back and my grandparents poured their hearts out over how sad this all was – because, you know, it’s never happened before sarcasm. My Pop said that he didn’t want to risk walking me down the aisle because if my parents did turn up he feared that he would be targeted by my father – which has happened before. He looked a little bit sad and surprised when I said I hadn’t expected him to walk me down the aisle anyway. I knew some drama with my parents would prevent it, but I could dream.

But yeah, not a word about the letter, or even apparently a consideration by my Nparents that I might actually be able to act of my own accord. There probably would have been an argument if the letter was mentioned, but it wasn’t.

Oh and the absolute gem is why my Nparents were expecting an invite. See my Emother was a daddy’s girl, and her daddy never thought that anyone was good enough. So when my Nfather rocked up and whisked her off her feet, her daddy wasn’t too pleased and threatened to beat up my Nfather AND my Pop. For some reason my Emother’s parents got a wedding invitation. My relationship with my Nfather went downhill from the moment I was born and he realised I wasn’t a boy like I should have been. I was only a daddy’s girl in the sense that I was daddy’s favourite punching bag, among other things. And my Nparents somehow compared these two situations, found them similar and got angry when they didn’t get an invite. #logic

(The “N’s” before parent, father and mother mean “narcissistic,” according to Alyssa)

Now, let’s be logical here and understand that all we have heard is this gril’s side of the story. We have no idea what her parents would say to this tale of woe.

Further, reading this “explanation” sort of shows she’s a bit of a whiney little twerp.

But maybe she was abused? We can’t tell from this.

But we CAN say that Alex and Alyssa give us no reason at all to side with them. She gives no examples of any abuse. In fact, the very fact that the parents want back in his life might show that they care about him and want to repair any damage to their relationship.

And yet, she acts like a childish little skeezebag with this oh, so funny “uninvitation”!

The truth is, by what we know there is no reason at all to side with Alex and Alyssa.

And let’s also note something else, here. With this kind of jerk move, Alyssa just might have taken away her future children’s right to know their own grandparents. Again, maybe these parents aren’t worth having around. But Alyssa has just selfishly taken any right to decide away from his future children AND her husband, hasn’t she?

But, what do you think? Is this uninvite funny? Is Alyssa justified? Did she do the right thing? Tell us your thoughts in the comments.

(Updated to reflect that it was the bide who wrote this.)