As I understand it[1], two of the attackers had Syrian and Egyptian passports on them. One traveled through Greece. The Paris atrocity is a direct result of open borders insanity. They have closed them now, but it is a little late. They don’t know who they have let in or what will happen next. Three of the terrorists were from France. All are now dead, but the word is that a number of planners escaped. ISIS has also claimed that this is the ‘First of the Storm’ and that there will be more coordinated attacks on other countries including America. There is now also a connection to a man stopped in Bavaria earlier this month in a vehicle loaded with explosives. These butchers are far from done and more is coming no doubt. 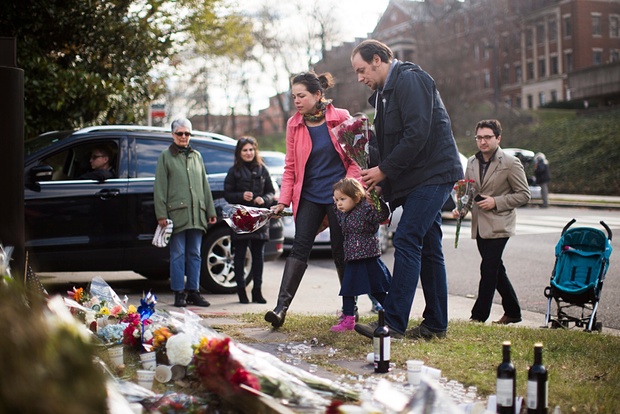 Visitors leave flowers at a memorial outside the French embassy in Washington DC in tribute to the victims of the Paris attack. Photograph: Jim Lo Scalzo/EPA

Afternoon summary – what we know

A vigil in Lille has reportedly turned sour after anti-Islam protestors, carrying flares and a banner that read ‘Expel the Islamists’, clashed with those paying their respects in the city’s place de la Republique.

Belgian police have made a number of arrests in Brussels in the aftermath of the Paris attacks, according to the country’s justice minister Koen Geens.

European Union heads of state and institutions have issued a joint statement announcing a day of mourning across Europe on Monday, including a one minute silence.

It is an attack against us all. We will face this threat together with all necessary means and ruthless determination.

Everything that can be done at European level to make France safe will be done.

We will do what is necessary to defeat extremism, terrorism and hatred.

France is a great and strong nation. Its values of liberty, equality and fraternity inspired and inspire the European Union.

This shameful act of terrorism will only achieve the opposite of its purpose, which was to divide, frighten, and sow hatred.

Good is stronger than evil. Everything that can be done at European level to make France safe will be done.

The holder of a Syrian passport found near the body of one of the gunmen who died in Friday night’s attacks in Paris passed though Greece in October, a Greek minister told Reuters.

“The holder of the passport passed through the island of Leros on 3 October 2015, where he was identified according to EU rules,” said Nikos Toscas, Greece’s deputy minister in charge of policing.

A Greek police source told Reuters that European countries had been asked to check the passport holder to see if they had been registered.

While this heavily implies that one of the gunman came into Europe along with refugees, Syrian passports are known to be valuable currency amongst those trying to enter Europe, and it is not yet confirmed whether the holder of the passport is indeed the perpetrator.

Three of the eight attackers who killed 127 people in Paris on Friday night are believed to have come from the Brussels neighbourhood raided by police this afternoon.

French media reports that three attackers were from the Molenbeek neighbourhood, where police are currently carrying out raids.

Reuters reports that one of the gunmen who died after attacking the Bataclan theatre last night was a Frenchman from Courcouronnes suburb south of Paris.

Courcouronnes lies roughly 20 miles south of the French capital and five miles south of Juvisy-sur-Orge, home to Amedy Coulibaly, who was involved in the Charlie Hebdo shootings in January.

Coulibaly killed four hostages in a kosher supermarket in the Porte de Vincennes before being shot by anti-terrorism forces.

RTL reports that the country’s federal prosecutor[3] will make a statement this evening.

I am hearing there may be Americans among the dead. There are also Tunisians, British, Swedish, Romanians and Belgians as well. ISIS is saying that France is a key target after the attacks in Syria and will be attacked again. France has declared three days of national mourning and then Hollande has promised a brutal response to ISIS’ attacks. He called it an act of war. He also said there were outside forces that were involved. 127 are dead, 200 are injured, 99 of them are critical. The Pope called this “mad terrorist violence.” Obama has pledged America’s support, but he can’t even call the enemy radical Islamists. He calls them ‘extremists.’ I do not see how you can fight an enemy, much less defeat them, if you can’t even call them what they are. The response to this should be monstrous – ISIS should be hunted down and eradicated with a vengeance. This just can’t stand. Our hearts and prayers are with the French as they mourn. 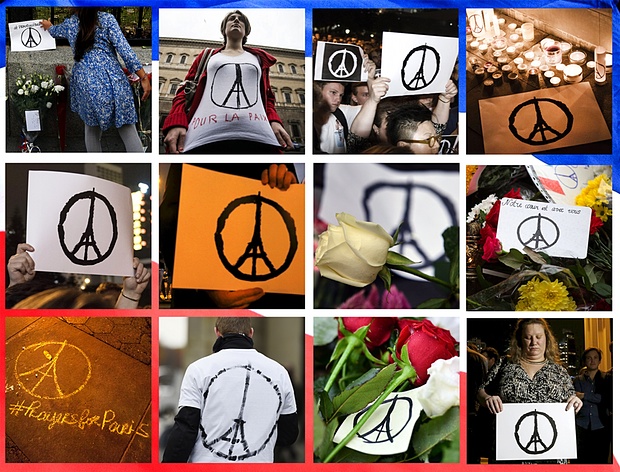