It’s Now Come Down To This: TransGender Sh*t-Ins

Just craptastic[1]. So either the signs will now be even more confusing when you just have to go and it will be a tossup on sharing bathrooms with people of indeterminate sex and/or all one stall bathrooms will be all purpose. Welcome to equality – we can all stand in pee now and have the joy of seeing the leftovers of the monthlies. Just as communists want equal poverty and squalor for all, the gay mafia and the fascist Obama administration want equal bathrooms for all. We can all be equal in slavery, poverty and bathrooms now. How very Russian. America will become one big sh*t-in. 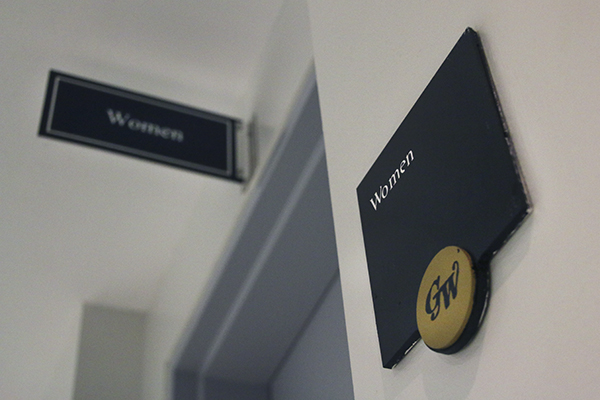 Media Credit: Desiree Halpern | Contributing Photo Editor
Facilities Services will label more than 80 single-occupancy bathrooms as “restroom”
instead of “men” or “women” on campus starting with the Marvin Center on Monday.

Welcome to the newest fad in Progressive protest theater – The Shit-In!

For GW’s Gender Inclusive Bathroom Week, which starts Monday, “Toilet Trainers” will be stationed across campus to spread awareness of issues like gender inclusion. Several student organizations on campus – including the Student Association, the Association of Queer Women and Allies and Allied in Pride – helped organize the program.

The week will include events like a “Square 80 ‘Shit In,’” where students can join Bathroom Week representatives to ask questions and address concerns about gender inclusivity on campus.

Schirvar, who is double-majoring in international affairs and French, said they have sometimes struggled to find a safe space in public restrooms on campus. [Read More…[2]]

Gender identification based on genitalia is the new bigotry.

Obama is stripping the nation of Christianity and forcing Americans to submit to the gay agenda (I almost said ‘kneel before’ which would have been too picturesque). The United States has officially gone Progressively batsh*t. Rush Limbaugh is right, this is a mental illness and we are all living in the asylum now. We are not becoming inclusive, we are becoming subservient. Now it’s getting to where we have to really consider whether to use a restroom while we are out and about or find a nice bush somewhere. Sigh. Common decency and civilized norms seem to now be passe, much like the Constitution.