You have got to be kidding me. That judge is pure evil[1] and is just as culpable as the dirt bag rapist. No violence? No intent to harm a toddler? So sodomy isn’t harmful. Raping a child is just par for the course. Sounds to me as though this judge is justifying similar impulses he has towards children. He should be disbarred and shunned. Cruel and unusual punishment for the rapist, huh? Not nearly long enough or cruel enough in my book. You two should be bunk mates. 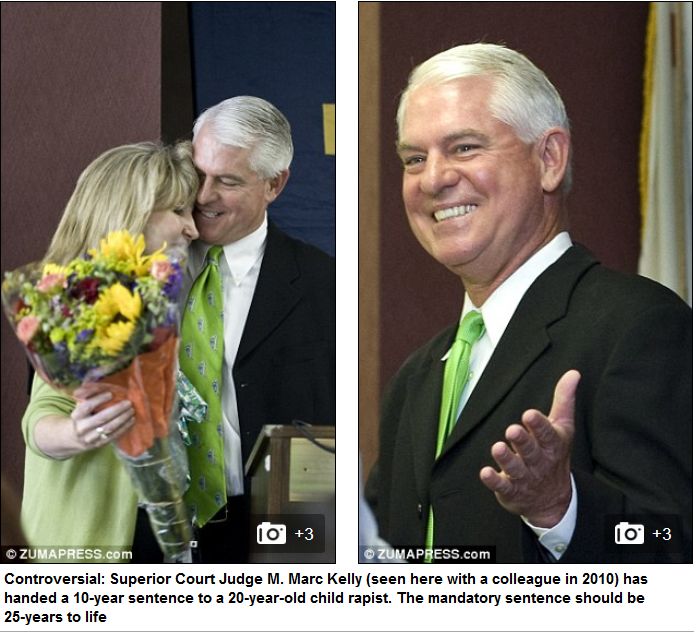 A California judge has reduced a child rapist’s mandatory 25-year sentence down to only 10 – saying anything longer would be ‘cruel and unusual punishment’.

Superior Court Judge M. Marc Kelly told an Orange County jury that 20-year-old Kevin Jonas Rojano-Nieto ‘did not intend to harm’ the three-year-old girl he raped at his family home in June.

The judge said that he was sure that although Rojano-Nieto sodomized the girl and covered her mouth so she couldn’t scream out, ‘there was no violence or callous disregard for the victim’s well-being’.

Judge Kelly also said Rojano-Nieto, ‘inexplicably became sexually aroused but did not appear to consciously intend to harm the victim.’

Prosecutor have said they will appeal the controversial decision and will be pushing for the minimum sentence of 25-years to life to be reinstated.

Rojano-Nieto was found guilty on December 3 of raping the girl who wandered into a garage where he was playing video games.

According to the court news service, Rojano-Nieto said he became aroused by the girl and pulled her pants down to rape her during the sickening attack.

While this was going on, he could apparently hear her mother calling out for her, so covered her mouth so she couldn’t scream back.

The girl told her mother after the assault that she was in pain and her mother called the police who found injuries consistent with rape.

“Although serious and despicable, this does not compare to a situation where a pedophilic child predator preys on an innocent child,” Superior Court Judge M. Marc Kelly said according to KTLA[2].

She said that Rojano-Nieto knew what he was doing was wrong because he covered the girl’s mouth during the rape so she couldn’t call out.

The DA will appeal and rightly so. There is something darkly wrong in California these days. The judge excused the pedophile by saying it was just a random act, that he wasn’t a sexual predator. Pulling down a 3 year-old’s pants, covering her mouth so she can’t scream and sodomizing her isn’t violent or predatory? The rapist knew exactly what he was doing. This is how sick and twisted our legal system and our society have become. The judge knew his ruling was vile, evil and wrong… guess he cares more about the rapist than the baby he raped. What a monster.