Gross.[1] Supporters of the butchers of Planned Parenthood staged a die-in at the March for Life rally in DC. Replete with white outfits with staged bloodstains on their crotches, these monsters screeched and dramatized their love of infanticide and death. Tens of thousands of pro-life activists protested in DC yesterday in spite of the weather and these loons just couldn’t let it go. A few dozen tried to disrupt the event. These people are demanding that full term abortions be allowed. Monsters. 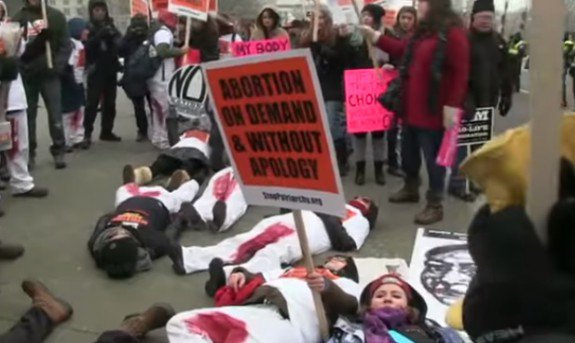 During the 2016 March for Life Friday, a few dozen pro-abortion activists staged a “die-in” by lying down outside the U.S. Supreme Court to represent women dying from back-alley abortions. It was the second year straight where radical protesters tried to halt the thousands who came to D.C. to speak for the voiceless. Last year, the group’s behavior caused arrests at the march. The group Stop Patriarchy took credit for this year’s event. Surrounded by tens of thousands of marching pro-lifers as well as police, abortion supporters wearing white pants stained with red dye dropped down on the sidewalk.

The pro-abortion demonstration, held on the 43rd anniversary of Roe v. Wade, ironically followed in the footsteps of the pro-life movement, which often organizes die-ins for the millions of babies destroyed by abortion since United States legalized abortion.

Cameras and media swarmed trying to take in and record for posterity the noble attempts of butchers. It’s disgusting. The die-in was meant to represent women dying in back alley abortions, which pretty much doesn’t happen anymore and is just dramatically stupid. Police were everywhere. This was ironically on the 43rd anniversary of Roe v. Wade. The group Stop Patriarchy took credit for this year’s event. From Newsbusters[3]: While women who had endured having abortions shared stories of regret into a microphone, the pro-abortion activists tried to drown them out with a megaphone. The radical protesters couldn’t dedicate a second of respectful silence to the women in grief from losing their babies. Mocking pro-lifers, they chanted, “pro-life, your name’s a lie, you don’t care if women die,” along with the typical slogan, “abortion on demand and without apology!” They also held up signs reading “Keep your rosaries off my ovaries” and “keep your theology out of my biology.” No arrests were made this year, but police held out handcuffs while facing the activists, many of whom wore Planned Parenthood and NARAL paraphernalia.