Things got a little extra crispy when a KFC hung a controversial sign and some customers didn’t like it. If that didn’t water the taste buds, then maybe KFC’s hot response will trigger something in your soul that will either make you laugh, cry or both. It’s their window and they’ll do whatever they want!

Here’s the sign hung on a window at a KFC in Gallipolis, Ohio: 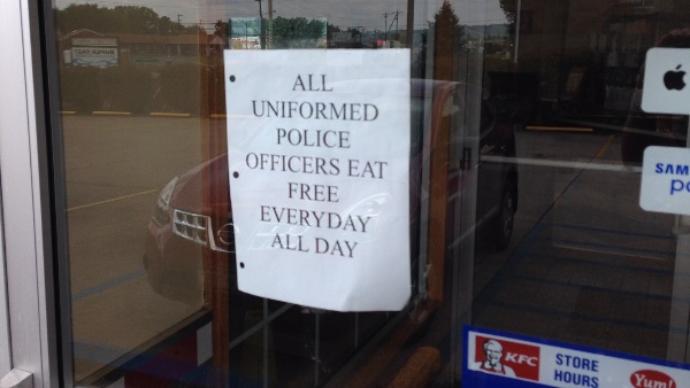 The sign reads “All uniformed police officers eat free everyday all day” and it’s all in caps lock, so you know they’re serious[1]. They also didn’t use any grammar or punctuation, so that means they are 110% serious and do not even attempt to mess with them.

Some police officers responded kindly and admit that they don’t prefer special treatment over their fellow citizens. The officers said they really appreciate it, but they don’t want to be held above the status of an everyday citizen, because at the end of the day, they’re everyday citizens too. Sure, they just have a job that deals with everyday nitwits.

Even KFC employees commented on the post in support of officers:

“Yes we feed police officers for free EVERYDAY!!! I work at the Russell KY KFC!! We honor our protectors!! Now we need to give free dinners or food to the veterans also!! I am going to bring it to their attention next time I see the owners,” the employee commented.

“They deserve everything they get and especially if it is free,” another viewer posted.

The response from the employees is beautiful. God bless those workers and give them a raise!

There may have been some complaints from liberals, but they’re going unheard. Every store in America can decide who they want to provide free food or services to. If KFC wants to feed their protectors, then let them. It’s their choice to do so.

Another incident, which wasn’t as positive as this one, had a job-ist/racist employee refuse to serve a police officer. Now can you imagine that happened in a role reversal setting. Imagine the cashier at a store was being beaten and robbed by a criminal and the police officer came in, saw that he didn’t like who the cashier was and said “oh heck no, I’m not protecting that one!” The amount of lawsuits and outrage in this country would be through the roof!

In an opposite incident, a Virginia police officer was denied service at a restaurant after one of the cooks refused to make food for the officer while she was in uniform.

“You better pull me off the line, because I’m not serving that,” the cook allegedly said, Fox News reported.

The relationships with police in some communities is at an all time low and we need to find ways to pick that up. We need to respect each other and those who swear to protect us. Treat police officers with respect and you will likely get it back. Constantly badger and yell at police and you’ll probably get shocked with a taser. Hopefully the tasering of disrespectful people ends up on YouTube so we can all point and laugh.

But nevertheless, they persisted. Nitwit liberals had to complain.