This gentleman is a very smart and kind Good Samaritan[1]. Logically, he did the only thing he could do for the deer. If he had tried to lift her out in front, she would have sliced him with her razor sharp hooves. It’s instinct. Plus, she probably weighs quite a bit. Going around to the other side and pushing that board out was good thinking. I’m surprised she wasn’t lame over this, but relieved she is free. That was a very good deed. 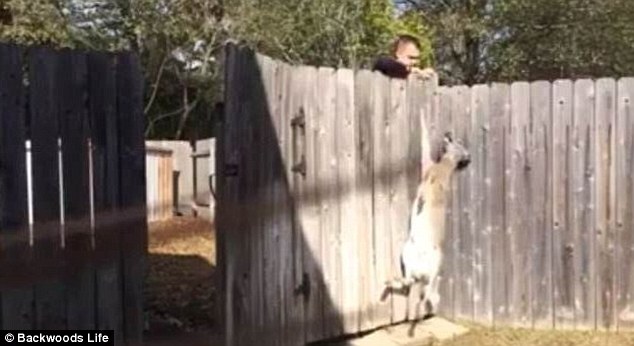 The man puts the camera down and then goes to forcibly push the board out
between the fence panels to free the deer.

A kind-hearted homeowner managed to free a doe who was left hanging from its hoof after misreading a leap over the wooden fence in his backyard.

The man filmed the encounter on his cellphone and as he approaches the dangling deer, she begins to bleat and grunt in pain.

However, despite hanging helpless by its leg after getting stuck in a gap between the fence, the doe appears to understand the man is there to help.

Indeed, the deer literally hangs like a fish on a hook, suspended about one foot above the ground, but does not thrash around wildly to free itself.

The video, which was posted onto the Facebook page of cable wildlife show, Backwoods Life, shows the man initially try to free the deer by pushing the hoof out.

The clip, which does not reveal the identity of the man or where the backyard is, then shows the man have another idea.

The man puts down the camera, which carries on filming and he is seen to walk behind the fence.

He then shoves out one of the wooden fence panels, which allows the deer to bolt to safety without even a thank you.

The poor doe was in distress and pain – that was very obvious. He gently spoke to her to keep her calm and to the doe’s credit, she didn’t thrash about. She may have been too tired and terrified to do so at that point. He found a way to set her free and she’ll live another day to leap fences and eat gardens. I love deer – they are beautiful creatures. But deer are not humans – expecting them to be grateful is foreign to them. They fear humans. But I’m sure, in her own way, she was very grateful. Now, all this Good Samaritan needs to do is fix his fence. He’s right – that’s not something you see every day.