Two years, huh[1]? It’s a pity that the LA County Sheriff left out the best form of self defense – a gun. Most of these scenarios could have been stopped dead in their tracks (pun intended) if someone had just been armed and trained to take a bad guy down. Many lives would have been saved and the bad guys would lose and be sent a strong message – this is not a kill zone… we defend ourselves. Instead, in true Progressive California style, they teach people to hide and cower. To only defend themselves as a last resort and then with some object like a fire extinguisher. That’s an excellent way to get dead. I can’t believe that the police in one of the most populated states in the country… one infested with gangs and violent thugs… glibly says: “Be afraid, very afraid… then duck and run.” This is why we have the Second Amendment – to protect ourselves and others. 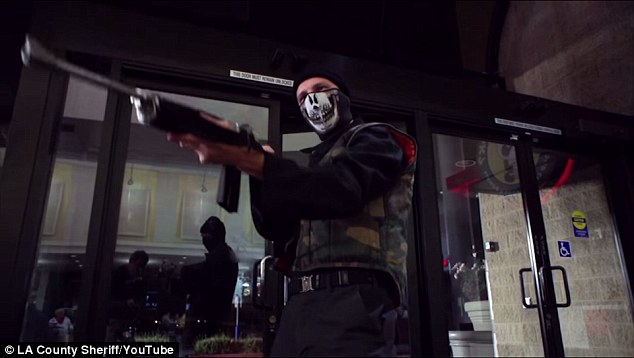 Terror: A masked gunman enters a food court and opens fire at patrons in one of the PSA scenarios.

A graphic new PSA from the Los Angeles Sheriff’s Department offers violent advice on what to do during a mass shooting.

The video, called ‘Surviving an Active Shooter,’ was uploaded to YouTube on Thursday.

The PSA shows blood spurting and multiple victims left on the ground in a variety of mass shootings. Bystanders are seen using several different survival methods.

‘This nine minute video presentation, which has been in production for nearly two years, is one of the most ambitious projects the Los Angeles County Sheriff’s Department’s Video Production Unit (VPU) has ever produced,’ a release from the LASD says.

It continues, ‘The video presentation features three vignettes inspired by true life events and introduces the viewer to concepts such as: cover and concealment, location awareness, and self-defense.’

In one, a man and a woman eat food together in a mall food court when a shooter wearing a skeleton mask on the bottom half of his face opens fire, striking several people.

The couple are able to flee because they duck low and conceal themselves behind objects during their escape. The man gestures to others nearby to follow through a hallway.

Another shooter situation in the PSA takes place at a school. At the start, a man sits on a park bench before getting the attention of the person sitting next to him – only to shoot him dead.

The gunman soon heads into the library and lets bullets fly.

A female library patron warns a woman coming out of the elevator onto the floor to go back inside. The female patron runs to flee as well – but is shot in the leg by the shooter.

The PSA encourages people to tend to the injured as long as it doesn’t leave them vulnerable to unwarranted danger.

The two women are able to flee into a classroom, and tell the students and instructor what is going on. The female teacher locks one classroom door, gets her students to barricade a door which cannot be locked with desks. She tells the class to huddle together in a corner out of sight and assist the injured woman.

The PSA encourages locking doors and turning off lights where possible – and also warns viewers to turn off cell phone volume.

The shooter later walks through a nearby computer lab, where he is confronted by police and shoots himself.

A different shooter situation shows a warehouse employee being fired before quickly turning a gun on his employer and killing her in an office. He then walks out into an open area and shoots multiple people.

One employee is left stuck with no way to escape the warehouse and nowhere to hide. The video’s narration warns that self-defense may be necessary in that situation.

The man grabs a fire extinguisher, waits for the shooter to approach, then sprays it in his face. Disoriented, the gunman falls with his weapon to the ground. Authorities quickly arrive.

All the bloody graphics in the world, meant to instill fear and get some kind of message across, can’t begin to measure up to a concealed carry permit and a gun of your choice. The bad guys have them – you meet deadly force with deadly force. They spent two years and probably millions of dollars producing a video for victims and sheep. You could have saved all that time and money and simply promoted self defense through self armament and spent that money on training shooters. That way, we win and the bad guys lose. But, I’m sure making the video was way more fun and more dramatic. And isn’t that what is really important? The Progressive message – you’ve got to break a few human eggs to make a collective omelet, right?