The sexual molestation that inevitably results (see here[1], here[2], and here[3]) is hardly the only reason that the liberal push for more homosexual adoption is morally abhorrent. How can it be called decent to put children into situations like this?[4] 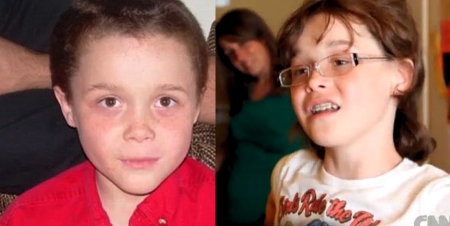 The lesbian parents of an 11-year-old boy who is undergoing the process of becoming a girl … defended the decision, claiming it was better for a child to have a sex change when young.

Thomas Lobel, who now calls himself Tammy, is undergoing controversial hormone blocking treatment in Berkeley, California to stop him going through puberty as a boy.

Whereas if they are freakified through grotesque medical practices best left on the Island of Doctor Moreau, they live happily ever after. Just ask Nancy Verhelst[6]. No wait, you can’t; she had herself put out of her misery like a deformed dog.

Thomas’s transition into a make-pretend girl began at age eight. His guardians are inflicting hormone suppressants to prevent him from developing a male voice, broad shoulders, and facial hair. If this doesn’t qualify as child abuse, the statutes need to be rewritten.

Whatever the motivations involved in this particular situation, given the pathological fear and hatred of males that often characterize women who base their identities on being lesbians, situations like this are an inevitable consequence of homosexual adoption and the bizarre moonbat notion that a person’s sex can be altered. The progressive ruling class is dragging the rest of society down a path that cannot lead to anything healthy.

On tips from Dan Feely and Josh F. Cross-posted at Moonbattery[7].