“Let’s teach them a lesson if they ever show up here.” Liberty Univ. Calls for Armed Christian Campus

Yes! Liberty University President Jerry Falwell Jr.[1] is urging his students to get concealed carry permits and get armed. In the first move of its kind that I have seen, Falwell says Christians on campus should be packing. I loved his quote: “Let’s teach them a lesson if they ever show up here.” The AP is all aghast saying that Falwell targeted Muslims. He’s targeting radical Islamists you fools and he should. Of course the media and Marxists will rip him nine ways from Sunday on his wording, but I don’t think Americans care anymore. They agree with Falwell. I’d want my kids and grand kids to be armed on campus, that’s for darned sure. We don’t know when or where we’ll get hit next. Being armed may not only save your life, but many others as well. It’s about time someone said this. 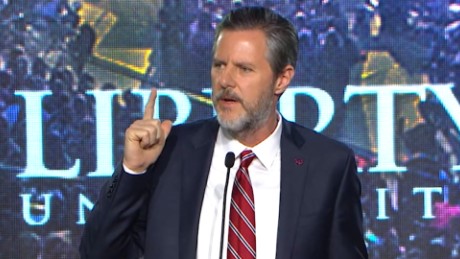 Liberty University President Jerry Falwell Jr. urged students, staff and faculty at his Christian school to get a permit to carry a concealed weapon on campus to counter any copycat attack like the deadly rampage in California just days ago.

“Let’s teach them a lesson if they ever show up here,” Falwell told an estimated 10,000 of the campus community at convocation Friday in Lynchburg. While Falwell’s call to arms was applauded, his remarks also seemed to target Muslims.

“I’ve always thought if more good people had concealed carry permits, then we could end those Muslims before they walked in .,” Falwell said. The final words of his statement could not be clearly heard on a videotape of the remarks.

However, Falwell told The Associated Press on Saturday he was specifically referring to Syed Farook and Tashfeen Malik, the husband and wife who shot and killed 14 people at a holiday party in San Bernardino on Wednesday.

“My administration is committed to making Virginia an open and welcoming Commonwealth, while also ensuring the safety of all of our citizens,” McAuliffe said in a statement issued late Saturday. “Mr. Falwell’s rash and repugnant comments detract from both of those crucial goals.”

Falwell also said he believed the campus needed to be prepared in the face of the increasing frequency of mass killings. He cited, for example, the 2007 massacre of 32 people at Virginia Tech, the deadliest mass shooting in modern U.S. history, and less than 100 miles southwest of Liberty.

“What if just one of those students or one of those faculty members had a concealed permit and was carrying a weapon when the shooter walked into Virginia Tech? Countless lives could have been saved,” he said.

Falwell’s message is apparently being heeded. He said more than 100 people had asked Liberty police about a free class to obtain a permit to carry a concealed weapon.

Liberty was founded by Jerry Falwell Sr., who was among the nation’s first conservative cultural warriors. The Moral Majority founder’s barbed commentary on contemporary matters such as gay Americans made him a reviled figure to some and a pioneering conservative crusader to others.

Following the San Bernardino shootings, which left 14 dead, Falwell said he began carrying a .25-caliber handgun in his back pocket. He said he’s had a permit for more than year.

During his address Friday, Falwell mentioned the weapon and reached around seemingly to fetch it.

“Is it illegal to pull it out? I don’t know,” he said, laughing, drawing some hoots from the audience.

Asked if he was concerned by the prospect of thousands of armed young people on campus, Falwell said Virginia has a minimum age of 21 for a carry-conceal permit. He said that meant only older students would be armed.

More than 14,000 students are enrolled at Liberty.

Falwell said he had also reached out to a first responder in San Bernardino to see if the school could offer scholarship assistance to his children.

Falwell’s remarks were first reported by the News & Advance (http://bit.ly/1Na9kYd).

When Falwell said, “I’ve always thought if more good people had concealed carry permits, then we could end those Muslims before they walked in,” he was obviously referring to extremists. The left will use anything against someone that they can to bring them down when they defend gun rights or go against Islam. Any little bit of wording they can twist will always be used as a weapon. All of us should be armed in case of an attack now. That is just common sense. Falwell practically got a standing ovation from over 10,000 students in the auditorium. I think it is fantastic. He told the Associated Press on Saturday he was specifically referring to Syed Farook and Tashfeen Malik, the couple who shot and killed 14 people during a Christmas party in a Southern California office building on Wednesday. Falwell told the News & Advance, “There are many good Muslims, many good moderate Muslims.” He also told the newspaper he believes it was clear that he was talking about the attacks in California and Paris. But of course, the media left that part out. Falwell also told the AP he believed the campus needed to be prepared in the face of the increasing frequency of mass killings. He cited the 2007 killing of 32 people at Virginia Tech, the deadliest mass shooting in modern U.S. history. Falwell said the university is only encouraging responsible gun ownership, not just gun owners. He also said he’s decided to carry a gun after recent attacks. Good for Falwell and Liberty University. I predict increased enrollment and a safer campus.