So, what does a rapid pro-abortion leftist do[1] when students disagree with him? Why he offers to rape them of course. A pro-life group at Purdue University pointed out correctly that abortionists have been responsible for the wholesale slaughter of millions of black babies during Purdue’s Black History Month. Being right is evidently cause for a college staffer to threaten rape and violence against them. Kristan Hawkins, president of Students for Life of America filed a complaint: “This is intolerable behavior, period. Purdue must terminate their relationship with Mr. Newman now. For the past week, our students have been called ‘racists,’ ‘human garbage,’ and ‘ignorant c*nts.’ They have courageously stood their ground and have met with black students who were offended by their educational display to explain their event and ask for help for future events. But now the safety of our students has been put into risk. Purdue cannot let a staff member publicly call for the rape of their students no matter how unpopular their speech.” Exactly right. 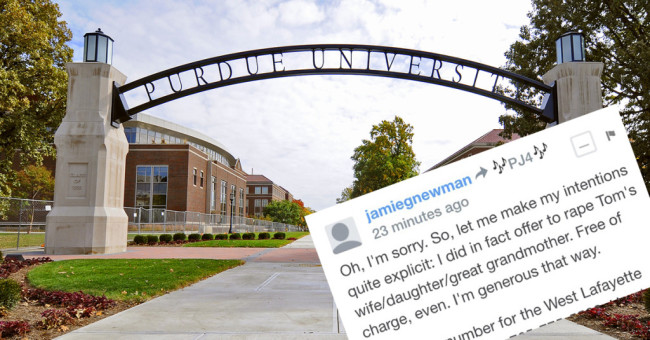 No group of liberals exhibit the party of hate more than pro-abortion liberals. I mean, that should be a given since they advocate murdering unborn children. If one is totes okay to kill an unborn child for any reason whatsoever, it should come as no surprised that they’d advocate violence towards others. For whatever reason.

In this specific case, the violence advocated is rape. Yep, rape. From a liberal. On a college campus. Here’s an example from Purdue University[3]. Long story short, a pro-life group used Black History Month to point out how many black murders abortionists were responsible for (check out BlackGenocide.com for some stats[4]), and a pro-abortion staffer from the college took exception to it using the same measured and well reasoned arguments you’d expect from the left. 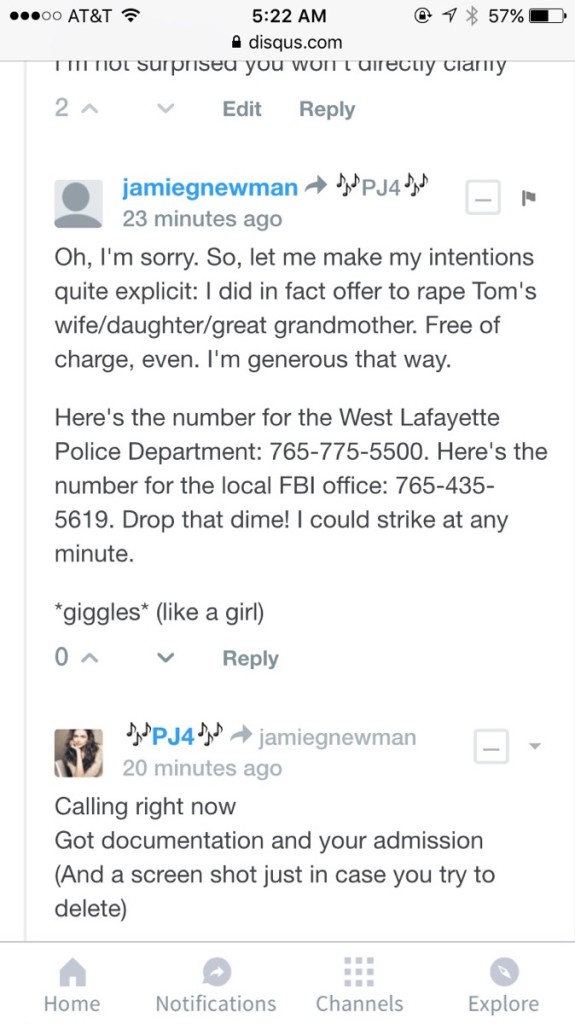 Last time I checked, the would-be rapist, Jamie Newman, still has a job there. It gets worse… the professor’s point in threatening to rape these women was for educational purposes. So the women would get pregnant and know what it felt like to be pregnant from rape. That is so evilly vile I have no words for it. It’s mind blowing. These are the same morons who advocated shooting all gun owners. Yes, that is idiot logic there at play. Savor the irony, then laugh at the stupidity of that statement. Gee, I thought liberals were all about love, not hate. I kind of think rape equates with hate. Liberals seem to be obsessed with rape. Sick and twisted. That’s okay… Kristan Hawkins took a screen shot and has already reported the rape threats to the police and the FBI. Hopefully, a visit will be forthcoming.