This is not good at all.[1] A video out of Los Angeles has now gone viral showing some guy following a cop in his car. Then it pans to the gun he is holding in his lap as the officer gets out of his car. It was first posted on Instagram and has since been taken down. The video, first posted by PoliceOne, follows an officer as he exits his patrol car and is completely unaware that he is being filmed by someone in the car parked behind his cruiser. The person filming the video appears to be seated inside a new car. Police are definitely aware of the video and are looking into it. Its captions were decorated with emojis of guns and said “F*ck the police,” PoliceOne reported. This is obviously a direct threat against officers in Los Angeles and is being treated as such. 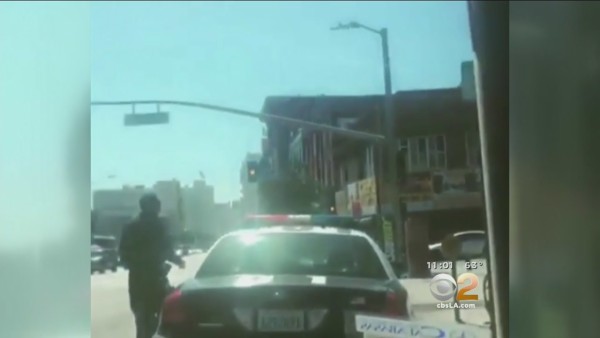 LOS ANGELES (CBSLA.com) – A disturbing video that seemingly shows an officer being stalked has the local law enforcement community on edge.

The footage, posted on social media, begins with a Los Angeles police officer getting out of his patrol car, followed by a shot of a handgun held by the person shooting the video. That individual was recording the video from inside a car parked behind the officer.

The video, which had gone viral, is enough for the wife of an L.A. police officer to think someone may be sending a threat. “It’s completely frightening, and I know that a lot of the wives are scared,” she said.

She is part of the LAPD Wives Association. Many of the members have seen the video, and so have many officers.

“They just want to do their job and yet all this hatred is coming at them. And it’s becoming more and more violent,” she said. “They are so scared that their husbands are not going to come home.”

CBS2/KCAL9 was told the video was posted on Instagram, and it has since been taken down. But many in law enforcement remain rattled.

“The hatred toward the officers isn’t going to accomplish anything. It’s just going to create a bigger divide.”
The LAPD said it is taking this matter seriously and has opened investigation.

The spouses of these officers are out of their minds with worry over this and I can’t blame them. You can thank Barack Obama and people like Jerry Brown for this. They bring in tons of illegal aliens and refugees who are violent criminals. They join gangs and they have a real thing for cops. There is no shortage out there of cop-haters these days between those just mentioned and Black Lives Matter, the Nation of Islam and the New Black Panthers, it’s very dangerous to be a cop out there. These officers are just doing their jobs and protecting people. Because they enforce the law, they are the enemy to these people and are targeted. The war on police is far from over… it’s just getting started. This is a stark reminder of that. The City of Angels has become a violent hellhole.