Man Finds Out His Wife Was Cheating. What He Did Next? PRICELESS [Video]

Well, if you are going to cheat on your spouse[1], expect to pay the price. On the one hand, this is pretty cold. On the other, she probably deserves it. She must have really hurt this guy for him to wait for the perfect time to kick her out. And I’m betting he has absolute proof she was dancing in the sheets with someone else. The guy didn’t get angry – he got even. Her birthday surprise was having her things packed up and then he sprung it on her. He even put a balloon on her stuff for added emphasis. I see a divorce pending. Someone should of told her, cheaters never prosper. 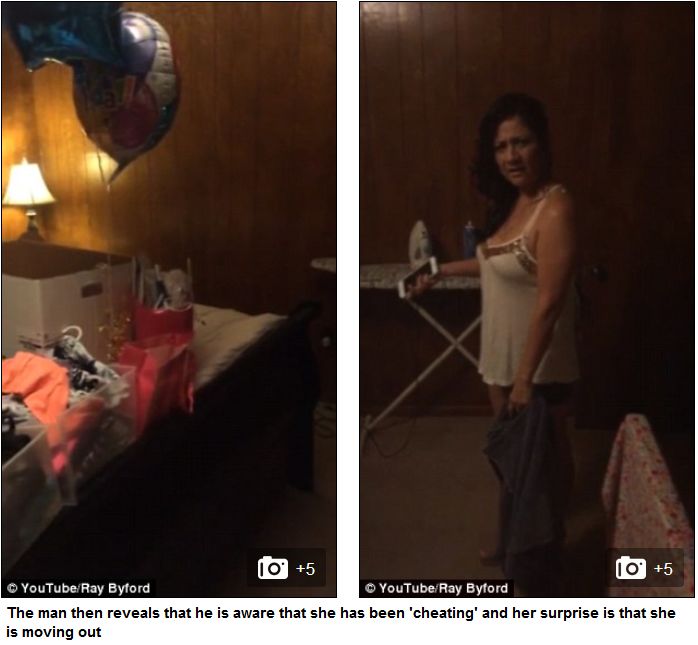 A boyfriend has filmed the moment he got revenge on his girlfriend for allegedly cheating on him – by filming a fake birthday surprise for her.

In a clip uploaded to YouTube by Ryan Byford, which has now been viewed two million times, the US woman is given a towel to wear as a blindfold as her partner leads her into another room in their home, singing Happy Birthday.

However, when the woman, referred to as ‘Bianca’, removes her blindfold she realises all her possessions have been boxed up, and that her ‘big surprise’ is that she is being chucked out.

The video, which was uploaded by Ryan on July 17, begins with the man leading his unsuspecting girlfriend into their home as she holds a towel over her face.

The man continues to lead her through the house reassuring her while reminding her: ‘No peeking!’

When they arrive to the room where the surprise is stored the man behind the camera begins to sing Happy Birthday to Bianca at which point she removes her blindfold.

She is presented with all of her belongings packed up in bags and boxes accompanied by a single balloon and to begin with she is unaware of what is going on, but soon enough the penny drops.

When the man confirms, Bianca asks why at which point he reveals that he believes she has been cheating on her.

He says: ‘Because I busted you cheating on me.’

What happens next is unclear as the video comes to an end before Bianca has a chance to respond.

This video has gone viral. I don’t much care for videos like this where you have a front seat to someone’s private life and to their hurt and sorrow. But sometimes, you just know that the person you are watching had it coming. We now live in a world where we risk everything we do, every encounter we have being put out there for the world to see. There were no winners here, just an avid audience. This was a nasty surprise for her and after going viral, massively embarrassing. Perhaps she’ll think twice before doing this to someone again. Kind of doubt it though. I really do.