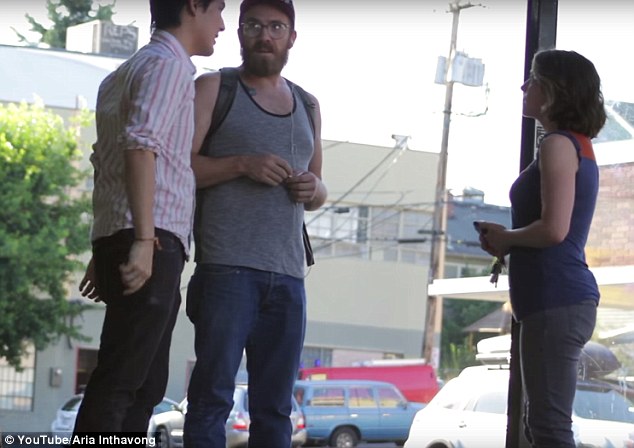 ‘I was like: “Dude what are you doing?” And he was like: “I am in Portland,” and I was like: “Me too,” the stranger explains, but his off-the-cuff explanation doesn’t stop there.

Christa notes that she was texting Aria until two in the morning but he never answered, and he claims that his friend actually stole his phone.

‘No, you didn’t take his phone,’ Christa says to the stranger in disbelief,’ but he goes along with the story and says: ‘Yeah, I did! He was like: “I got to call my girlfriend,” and I was like: “No! It’s a guys’ night.”‘

Aria Inthevong, a YouTube personality, tested the “bro code” by asking random strangers to lie to his girlfriend. Most of the men approached went along with the story, with some guys offering quick witted, vivid answers, portraying a wild night out. Some guys also mentioned that maybe he should work things out with his lady.

The “bro code” exists, but in reality – none of us want to be stuck in this situation with a real friend. Would I lie for a real friend? I would, but more importantly I would help them fix whatever was broken. If you’re a real “Bro,” then you help your friend in the best way possible.

Would I play along with this story if I was approached by a total stranger (not my real bro)?

Their girlfriend would think we reenacted every scene from Caligula.