This young man is just evil.[1] I have to disagree with the judge on one point… there’s nothing ‘bright’ about this individual. He’s stone cold stupid and murderous. After taking the scratch n’ sniff birthday card to his ex-girlfriend’s boyfriend’s home (he walked 8 miles to put it in his mailbox), he went on to brag about it to a coworker who immediately reported him and prevented his intended victim from dying a horrible death. While in jail awaiting sentencing, he solicited a fellow inmate to kill the investigating detective and rip out the tongue of the prosecutor. This is no misunderstood, jilted lover… this is a calculating monster. 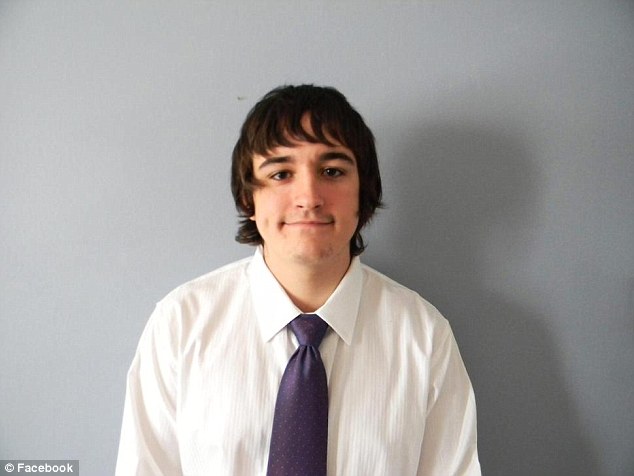 Nicholas Helman (above), 20, of Hatboro, Pennsylvania was sentenced to 20 to 40
years in prison on Monday for sending a card laced with ricin.

A suburban Philadelphia man who sent a romantic rival a scratch-and-sniff birthday card laced with the deadly poison ricin was sentenced Monday to 20 to 40 years in prison.

Nicholas Helman, 20, of Hatboro, wept as he said goodbye to his family after being sentenced in Bucks County Court.

According to The Philadelphia Inquirer[2], prosecutors said he laced a card with a lethal dose of homemade ricin in March 2014, then walked eight miles to the Warminster home of a man dating his ex-girlfriend and put the card in the mailbox.

Helman bragged about the plot to a co-worker, who alerted police, prosecutors said. Authorities stopped the rival from opening the card, and he wasn’t injured.

Helman tearfully told the judge he was ‘extremely sorry’ and wished he could ‘turn back the clock.’

‘I don’t know how or why my mind came to this awful decision,’ he said.

Months after his arrest, Helman was charged with asking a fellow inmate to kill an investigating detective and rip out the tongue of the prosecutor.

He acknowledged in court having threatened other witnesses and co-workers.

Helman said a fellow inmate counseled him to write such a letter, arguing that he could avoid prison by writing a ‘crazy’ letter that would get him sent to a mental health facility.

Judge Alan Rubenstein displayed little sympathy, calling his crimes ‘extraordinary’ and comparing them to actions of would-be terrorists recruited over the Internet.

‘You are bright. You are articulate. You are responsive,’ Rubenstein said.

But I don’t think you appreciate the damage you have caused to people very close to you.’

The judge said, however, that he would recommend that he be sent to a Luzerne County facility with a strong mental health program.

I have zero sympathy for this psychopath. He should get mental health assistance, but he should never be allowed to walk among normal human beings again either. If they let him out, he will kill and gleefully so. When Helman says he is sorry, while crying crocodile tears, he means he is sorry he got caught and didn’t succeed. Someone like this has no conscience or they would not have done what they did in the first place. Morality and right and wrong are fluid concepts to someone like Helman and they have virtually no meaning in his lexicon. Judge Rubenstein is correct in that Helman’s mentality is that of a terrorist. I think Helman knows exactly why and how he arrived at the decision he came to. He planned his attack and carried it out carefully – his biggest mistake was being so full of himself he couldn’t shut up. I’m sure he’ll rectify that psychotic flaw in his personality repertoire.