Marilyn Mosby is a racist, ladder climbing, corrupt prosecutor trying to make her political bones off the death of Freddie Gray[1]. She threw specious, hyped-up charges against six cops, ruining their lives and making it impossible to defend themselves. Now, she preens for Vogue and other media outlets while trying to gag the attorneys for these officers. It’s contemptible. Did you know[2] a videotaped police interview exists in which the man who rode in the back of a Baltimore police van with Freddie Gray claims that the 25-year-old was banging his head and “sounded like a madman?” Yep, just as I said from the beginning, Gray was stoned out of his mind on opiates and accidentally contributed to his own death. Darwin Awards anyone? 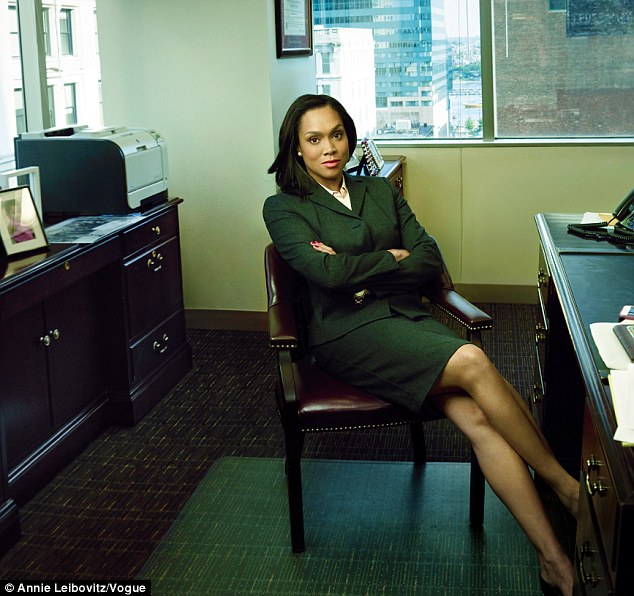 This is one of the pictures from the Vogue photoshoot by Annie Leibovitz, the renowned photographer, which lawyers say is evidence of double standards by Marilyn Mosby.

The chief prosecutor in the Freddie Gray case has been slammed for trying to stop lawyers for the six accused police officers from talking to the media – while simultaneously appearing in Vogue.

Marilyn Mosby, the State’s Attorney for Baltimore, is lauded as a ‘heroine and lightning rod’ in a celebrity-style profile for the famous fashion magazine.

The 2,000-word interview by writer Heidi Mitchell is accompanied by photographs taken by Annie Leibovitz, whose recent subjects include Caitlin Jenner, Rihanna and Kim Kardashian.

It applauds the glamorous 35-year-old attorney as doing ‘what no lead prosecutor in America had done in many turbulent months: bring swift and severe charges against police officers in the death of a black man’.

However opponents have accused Mosby of double standards for trying to block the defense from speaking to the press with a series of controversial court motions.

Mosby filed for a gag order last month that would have banned all parties from talking publicly about the upcoming trial of six Baltimore police officers, who face charges ranging from second degree assault to depraved heart murder.

That failed on procedural grounds but the young lawyer has since filed two similar motions, the latest on Wednesday – the day after Vogue published its article entitled: ‘Meet Marilyn Mosby: The Baltimore Prosecutor in the Eye of the Storm’.

Mosby has also given interviews to Marie Claire, Cosmopolitan and appeared briefly on stage with Prince during a ‘Rally4Peace’ concert in honor of Gray last month.

But in court filings seen by Daily Mail Online, she accuses the defense of jeopardizing the upcoming trial by mounting their own ‘media blitz’ and publicly ‘attacking the merits of the case’.

Her office redoubled its efforts this week following the leaking of an autopsy report into Gray’s April 19 death, arguing in a updated filing that: ‘Even in death, Mr. Gray is not being provided with the appropriate respect that all humans deserve.’

Lawyers for the accused declined to discuss the latest motion, however a number of high profile attorneys questioned the need for it – with one former Baltimore prosecutor describing Mosby’s position to Daily Mail Online as ‘absurd’.

‘The Vogue thing is simply self-promotion,’ said Staci Pipkin, a Baltimore-based defense attorney who previously worked as a prosecutor in the State’s Attorney’s Office.

‘It seems clear that she has higher ambitions. I have heard from many people that currently work for her that all of her decisions are based on what promotes her.

‘The prosecutor should be the person who wants to stay out of the spotlight. Their job is to be low key and to give their other prosecutors the chance to do their job properly.

‘To make public, political statements then expect the defense not to respond is unfair, that’s not how the rules work. It’s absurd.

‘The beauty of the American justice system is that it’s supposed to be open and free. Everyone can know what the evidence is and that’s what is supposed to engender trust in the eventual verdict.’

Mosby withheld the autopsy results[4] for two months and they were just leaked. Gray was throwing himself around all over the place in the back of the van and banging his head on the walls. They eventually stopped and put him in ankle cuffs and laid him flat on the floor. It was after this, the medical examiner concluded that Gray suffered a severe spinal injury (which led to his death, a week later). At some undetermined point during the van’s journey, he was catapulted by the force of its deceleration and crashed into the interior. The injury is likened to a “shallow-water diving accident.” Significantly, however, the medical examiner, Carol H. Allan, surmised that Gray probably could not have sustained his severe injuries if he’d remained in the prone position the police had put him in. This was not murder or depraved indifference… it was suicide by stupidity. Mosby knows these officers are basically innocent, but they are nothing more than stepping stones for her to grab more power and notoriety.