Marine unleashes on president: Mr. Obama, you are a tyrant and nothing more [Video]

This Marine vet eloquently states and voices[1] the anger all of us are feeling towards President Obama. This is a man who is intelligent, courageous and well-informed. He is tapping into what each of us are thinking… the sadness over the Chattanooga shooting and all the other unconstitutional crap Obama has foisted on this nation. He calls Obama out for his lack of respect and the shirking of his responsibility as President of the United States. He states that Obama should step up or step down. That he doesn’t have our respect, just our disdain. You need to hear this video and pass the message of this Marine vet far and wide. Because he is an American as we all are, and he is speaking for each and every one of us. 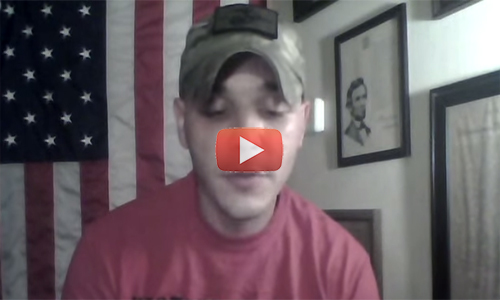 A U.S. Marine veteran unleashed his anger at President Barack Obama in a direct video message that quickly went viral.

The unnamed Marine, a resident of Chattanooga, Tennessee, first took Obama to task for his response to the deaths of five servicemen in a terrorist attack in the city.

“The day of the attack, you deliver a statement and you don’t even have the decency to stand up,” he said, citing examples of other instances in which Obama stood when making statements about events.

“You sit slumped down in a chair and ramble through some poorly scripted apology that sounds as sincere as ‘if you like your doctor, you can keep your doctor.’

He also schooled the president on his desire to erase U.S. history .

“Our Founding Fathers knew this day would come, so they left us, the people, the power to overcome,” he said. “Mr. Obama, you are a tyrant and nothing more.”

This vet just gave the most intelligent, coherent lambasting of Obama I have heard in a long, long time. It came from his heart. He hit it out of the park. Obama and the Progressives are erasing our history as I have written on previously. He doesn’t care about the four Marines and the sailor that were gunned down in Tennessee. It didn’t fit his political agenda, except in the case of constitutional gun control. It took Obama days to fly the flag at half mast and he only did so after pressure and the fact that Donald Trump had already done so. This Marine works six days a week to feed his wife and two children. He’s dead tired when he comes home from work, but he took the time to go pay his respects to his fallen brothers. Obama couldn’t even be bothered to stand. He slumped in a chair and looked bored. Typical. I agree with this vet: “Mr. Obama, you are a tyrant and nothing more.” And to you Gunny, Semper Fi.