McDonald’s Customers WATCH Encounter Between Black Teen And Cop And Record It!

A white police officer and a black teenager were both standing by the register in a Texas McDonald’s. That’s when people saw what was about to happen and they recorded it or took pictures on their phone so they could post it to social media.

The cop didn’t pull out his taser, gun, nightstick, or any weapon at all. The teenager didn’t steal, be rude, or attack anyone either. What happened was the complete opposite of all of that. The cop pulled out his wallet and basically told the teenager that his meal was on the house. Not technically on the house, but the officer wanted to treat him to a meal. Finally something worth sharing to millions of people!

This is such a breath of fresh air with all the bad news surrounding cops and their relationship with black America[1]. That’s a relationship that we all need to work on. Respecting each other needs to be the ultimate goal of every citizen in our country.

If only we could get more stories like this in our cruel world, then we would be in a much better place mentally. 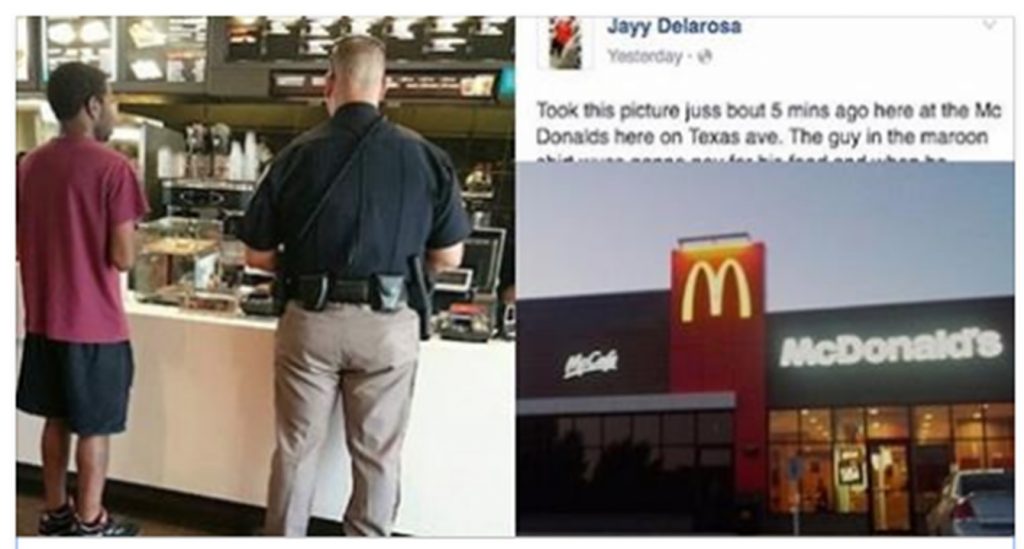 The heartwarming moment when a police officer paid for a black teenager’s meal at a Texas McDonald’s was captured on camera by a witness on July 11.

The image quickly went viral after it was posted on Facebook and has been shared over 2,000 times in two days.

The teenager, wearing a maroon shirt in the photo, pulled out his wallet to pay for his food before Brazos County Sheriff’s Office Deputy Michael Calhoun decided to treat the young man, KAGS reports.

One man does something nice for another. I believe everyone of us needs to pay it forward and send some good vibes into the atmosphere.

Jayy Delarosa posted the original photo on Facebook and wrote this wonderful caption about it:

Took this picture [just] bout 5 mins ago here at the Mc Donalds here on Texas ave. The guy in the maroon shirt [was] gonna pay for his food and when he pulled out his wallet the officer said “no man I got it. Get what [you] want” there is good police officers out there not all are bad. This touched my heart.

I’m sure the liberals might throw shade at this and find something wrong with it, but forget them if they can’t appreciate a good story. And if Black Lives Matter complains because someone wrote that #AllLivesMatter, then forget them too. We don’t need their negativity around here.

I bet you were expecting a shooting or someone getting arrested when you read a headline that involves black folks and a police officer. That’s because the liberal news sites and race-baiters constantly write headlines with the color of people’s skin just to get clicks. We used a title like that to show you a prime example of where we’re all going wrong. Any time we see a title like this, we’re probably trained to think the worst is about to happen. That’s because liberal mainstream media has a bad habit of race-baiting people to get ratings and they love to lure you in with a horrible story and throw the race card out there. They do it because it works and it gets people riled up.

We need to focus on more good stories like this and remember that there will always be good and bad people in the world. The good people, like the two men in this story, deserve the attention of our readership.

Pay it forward and let’s make sure we make more amazing stories like this happen on a daily basis.