What a waste and this is truly cruel[1]. This was definitely arson and probably committed by animal rights activists. They stole a bunch of equipment and then set the place on fire killing eight animals – they boiled one of Michael Jackson’s alligators to death. The other has smoke inhalation, but will live. They’ve hit this zoo multiple times. Now, the owner will have to hire security guards to protect the rest of the animals. These animals died needlessly at the hands of hypocritical nuts. 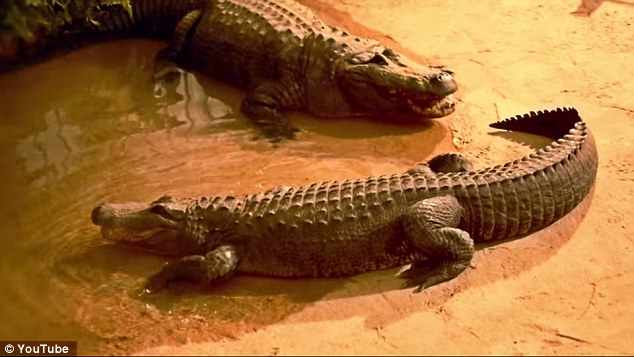 Alligators: At least one of Michael Jackson’s alligators (photographed)
from his Neverland Ranch died in a fire at the Garold Wayne Interactive Zoological Park in Oklahoma.

Eight animals are dead, including at least one alligator that once belonged to Michael Jackson, after a fire last week destroyed two enclosures at a zoological park in Oklahoma.

Authorities suspect an arsonist is to blame for the March 26 fire that left seven alligators and a crocodile ‘boiled to death’ at the Garold Wayne Interactive Zoological Park, News OK[2] reports.

The fire was set in the early morning hours that March day and Joe Schreibvogel, the founder of the zoo, said not only did the alleged criminal set the fire, but also stole a large amount of equipment Schreibvogel used to record his independently produced television show, JoeExotic TV.

‘This was personal,’ he told News OK. ‘They targeted the studio to shut me up. They wanted to get me off the air…or else they would’ve targeted something else [in the Park].’

In addition to destroying the two reptile enclosures, the fire also destroyed a video production studio.

Garvin County Sheriff Larry Rhodes told KJRH[3] that the fire was arson and most likely an attempt to cover up a burglary or theft.

Only one alligator escaped the blaze. KJRH reports that one alligator that reportedly belonged to the self-proclaimed King of Pop suffered severe smoke inhalation but is in recovery.

Schreibvogel told News OK he is often targeted by animal rights groups and extremists, calling them ‘animal terroristst.’ He said it is an ‘ongoing pattern,’ noting that he has received threats before.

‘It is more of disgust,’ He told KJRH of his feelings toward the incident. ‘If somebody has an issue with the zoo or an issue with me personally then take it up with me.

‘These animals didn’t deserved to be burned to death.’

Rhodes told News OK that an arson investigator has not officially declared the incident a case of arson, but has ruled out other likely causes like electrical issues and lightning from recent storms in the area.

King of Pop: After the worldwide mega-star died in 2009, the animals that made up his massive menagerie were spread across the U.S. to animals preserves, sanctuaries, and animal enthusiasts

No one has been arrested or charged in the case. Schreibvogel, who reportedly filed for bankruptcy in 2013, said repairs will cost $250,000.

After the worldwide mega-star died in 2009, the animals that made up his massive menagerie were spread across the U.S. to animals preserves, sanctuaries, and animal enthusiasts.

Jackson’s alligators were taken to the Park along with his albino Python named Madonna, the Telegraph[4] reports.

Schreibvogel said that, despite the fire, the park will remain open but armed security guards will be on duty at all times.

They are indeed animal terrorists as far as I am concerned. You can’t get that alligator back – Michael Jackson is no longer and his alligator is irreplaceable. I hope they find these terrorists and lock them up permanently. If they will go this far and kill the animals they claim to protect, they will hardly blink at killing a human. They have no respect for businesses, private ownership, animals or nature. They are zealots who don’t care what damage they do to further their cause and they are evil. At least the park will remain open – you’d expect better in Oklahoma.