It just kills me to say this, but I like Mooches’ State Dining Room[1] far more than Hillary’s. It’s more elegant and less feminine. Having said that, I am certainly relieved that it didn’t take after her personal fashion sense. That would have been horrific. Now, I would have preferred it even more if it had been in the tradition of our founding fathers and the art had been traditional. But even so, I find the decor tasteful and soothing, not jarring and clashing as Hillary’s was. 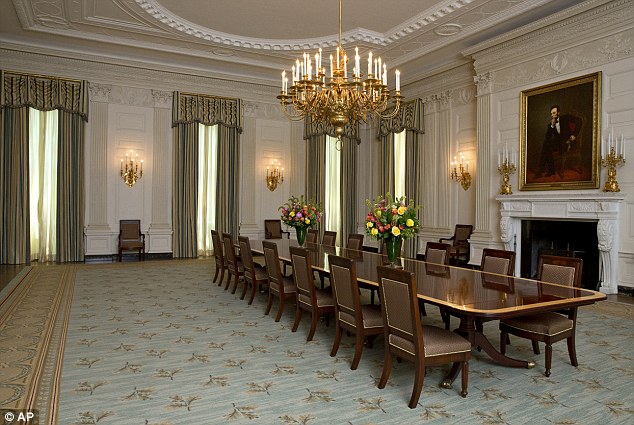 Michelle Obama has given a touch-up to the White House State Dining Room, the latest interior design change that will endure long after she leaves the building at a cost of $595,000.

Her modest changes to the room where many dinners and other events are held follow this year’s more dramatic remake of the Old Family Dining Room and the unveiling of the Obama china service.

The change, which has been years in the making, comes just months after head florist Laura Dowling quit her post and was escorted from the building by security.

DailyMail.com reported that Dowling had been pushed out by ‘jealous’ rivals from her post.

Sources close to Dowling suggested she was upset at having to leave and blamed her demise on the intense rivalry that exists within the small coterie of decorators and designers that serve the White House.

‘She is very sad about leaving the White House,’ said one source on condition of anonymity.

‘She was very proud to work there and this has come as a shock. It’s all about jealousy – Laura has not put a foot wrong.

‘She was very hardworking and she has always been professional and passionate about her work. She and her husband have said they can’t talk about it now.

‘But they’ve said that when the time comes they will reveal what really happened.’

Ms Dowling’s muted departure was in stark contrast to tributes afforded to other departing White House fixtures such as the Obamas’ personal chef, Sam Kass, who was praised for his ‘extraordinary legacy’ when he left last December.

Her website promises arrangements that transcend ‘fads and trends’, however rival florists who continue to provide bouquets to the White House told The Washington Post her ‘fussy style’ fell out of favor with Mrs Obama.

They pointed to the recent refurbishment of the White House Family Dining room, which includes abstract paintings and a 1950s-inspired carpet, as an illustration of how the First Lady’s tastes have moved on.

Ms Dowling is said to have resigned on February 13 – just days after the ‘thoroughly modernized’ room was unveiled. She was escorted from the White House by security, sources said.

It wasn’t until six weeks later that Mrs Obama’s office issued an official statement to say: ‘As chief florist, Laura Dowling and her team treated guests of the White House to their beautiful floral arrangements.

‘Ms Dowling’s creations were always lively and colorful, reflecting not only the season but the unique and historic rooms which they graced.

‘No two arrangements were ever the same and each one left guests with a lasting impression of the elegance and history of the People’s House.

‘We are grateful for her contribution over the years and wish her well.’

As for the new dining room, there are silk draperies with vertical stripes of peacock blue and ecru replace curtains made of ivory silk brocade and designed with flowers, baskets and ribbons.

The blue in the draperies echoes the “Kailua” blue that trims the modern-inspired china service the first lady unveiled in April and recalls the waters that surround President Barack Obama’s home state of Hawaii.

Mahogany side chairs and arm chairs, custom-made in North Carolina, replace a set that was upholstered in a golden yellow fabric.

The new chairs are done in a brown, grid-patterned ‘horsehair’ fabric and trimmed with brass nail heads. They were modeled after arm chairs that President James Monroe acquired for the East Room in 1818 from a cabinetmaker in Washington’s Georgetown neighborhood, according to White House curator William Allman.

The Old Family Dining Room, however, is hideous. The furniture doesn’t look like it matches and the art is tasteless. It looks like they were going for an African theme, but ended up with a dreary, dead-brush feel. As for the florist leaving, I get the feeling that envy, bitterness and just plain meanness rule the roost in the First Lady’s presence. Someday, we are certainly going to hear some jaw-dropping stories. Right now, that florist is probably bound by an ironclad non-disclosure agreement. But that won’t hold forever. The pettiness and sheer littleness of Mooch will one day make for some highly entertaining reading and even better history – one which shows how not to comport one’s self while living in the People’s House. 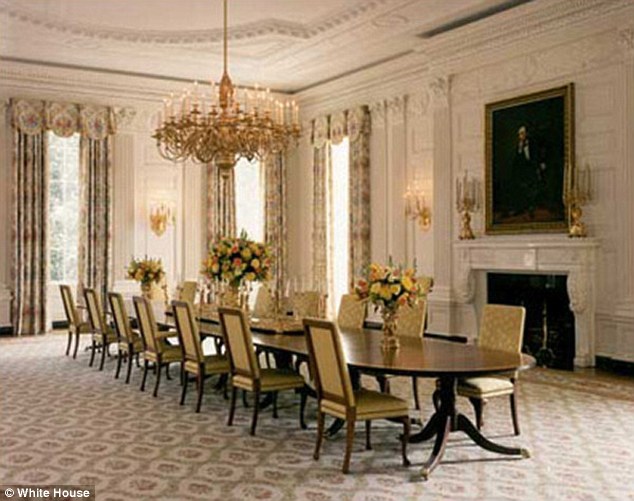 Former: The room was last done by Hillary Clinton in 1998 while her husband was in office. 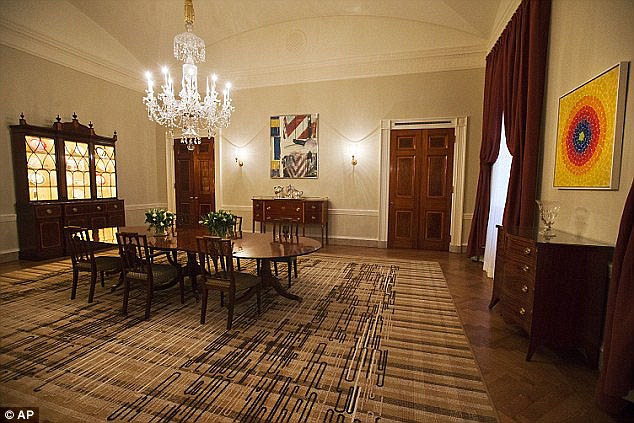 More change: In February, Mrs. Obama unveiled an updated look for the Old Family Dining Room, a smaller dining room adjacent to the State Dining Room on the first floor.