Well, this is interesting. A judge in Michigan sided with a father who demanded to be allowed to openly carry his firearm inside his daughter’s elementary school which was designated a “gun-free zone.” The school said he couldn’t enter the premises even though open carry is the law in Michigan. Now a judge has agreed with the father! 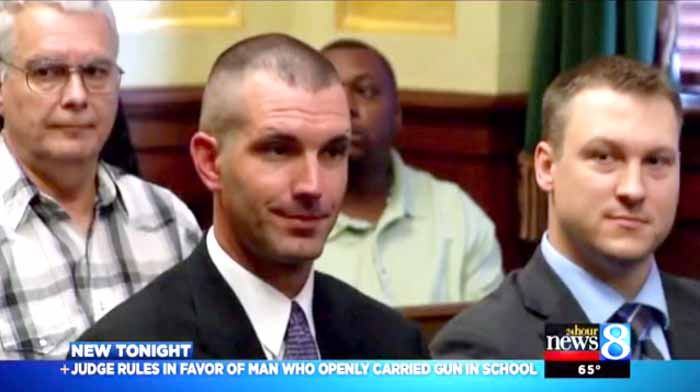 The father said that the school had no right[1] to prevent him from following Michigan’s firearm laws.

According to the Detroit Free Press, Kenneth Herman sued a Clio, Michigan, school district, arguing that he was denied access to his daughter’s elementary school on multiple occasions when he tried to pick her up from the school because he was openly carrying his pistol.

“I think schools being gun-free zones is not a wise idea,” Herman told WOOD-TV. “I think having law-abiding armed citizens in there provides some measure of protection that isn’t a glass door that can be broken out.”

State law allows people who have concealed carry permits to carry on school property, which ultimately led to Circuit Judge Archie Hayman’s decision on Monday. However, Tim Mullins, the school district’s attorney, argued that the law also allows school districts to develop policies for the “safety and protection of students,” according to the Free Press.

Mullins said he expects the school district will appeal Hayman’s decision, as does Michigan Open Carry, the nonprofit that represented Herman.

That is a refreshing decision, isn’t it?

After all, a school can’t decide on its own hook to cancel people’s Constitutional rights!