America has lost her moral compass and this is a great example of that. Sometimes evil is found in the innocence of toys and stalks the souls of children. Evil at the bargain price of $1 – red, glowing eyes… blood from the mouth… and a child slitting their wrists. A toy branded with fairies and magic and lost among Disney characters and childhood fantasy. A mother buying this ‘Evil Stick’ may think it was meant to represent a bad fairy, witch or evil queen as a prop. But, it is sooo much more. It is hate and full of the blackest intent not fit for any princess of any age[1]. 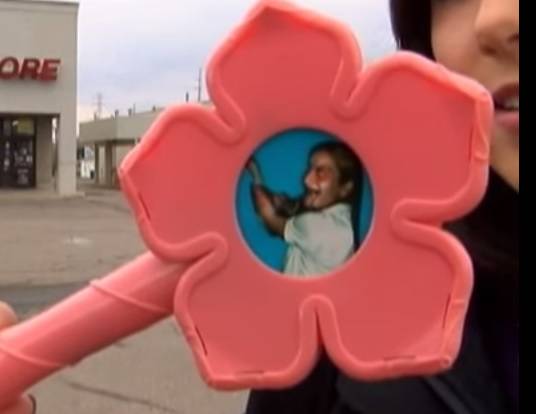 A princess wand, dubbed the ‘Evil Stick’, promises ‘wonderful music, magic and fairies. But underneath the silver foil, it shows the image of girl slitting her wrists with a knife.

The toy wand also emits a cackling laugh and flashing red eyes. This upset an Ohio woman who bought the toy[3] wand for her two year-old girl.

An Ohio mother is upset after she bought a “princess wand” for her daughter, but the toy revealed a disturbing image.

Nicole Allen bought what she thought was a princess wand from a dollar store earlier that week. A piece of foil came off the wand, and underneath there was a disturbing image of a girl cutting her wrists with a knife.

Allen said the toy’s packaging included a fairy, but the store owner told News Center 7’s Lauren Clark that the toy is called an “evil stick,” so the mother should have realized what she was buying.

The store owner said he would take the wands off the shelves if he receives more complaints.

The packaging is marked for children ages three and up.

What kind of person who owns a business knowingly stocks something like this? The owner won’t take it away unless there are more complaints. Let me get this straight… you have children and don’t mind this? You would let them buy it? People should not shop at this store and parents need to ensure they know exactly what they are buying for their kids. In a new world where porn is the norm on TV, where morals and Christianity are branded as evil, where sex and abortion are encouraged and Satanic coloring books are in the schools along with the conversion to Islam, I think I would be very choosy indeed about what my children played with, read or watched. The owner blames the parent for not discerning the name ‘Evil Stick’ to mean exactly what it says… I blame the store owner, society and a Progressive culture.