Mom Gets Nervous When She Sees Officers Heading For Her Kid. The Next 25 Minutes Make Her Smile. [Video]

Most police officers are the very best people you will ever know. That’s why they do what they do[1]. My whole life, I have seen officers stop and play with neighborhood kids, or they’ll just stop to talk in general. They are always on the lookout to help others even when they aren’t on duty. Don’t confuse your local police with government thugs. The local police, in my viewpoint, are heroes who do jobs that others won’t or can’t do… just like firefighters. It’s dangerous, thankless work and they do it to serve and protect. For most cops, it’s a calling. 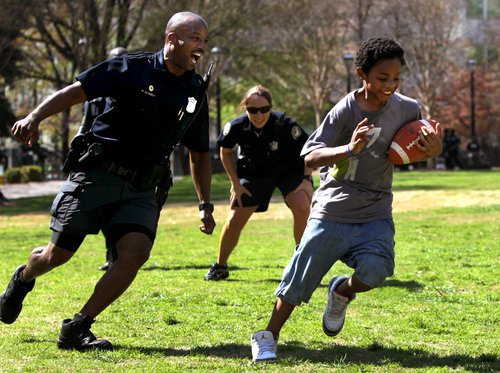 Despite the controversies regarding police officers in the news lately, two Plymouth, Minnesota[2] officers are being praised for doing what Michelle Keenan’s son referred to as the “coolest thing ever.”

Earlier this week, Keenan’s son and his friends were playing football in the grassy area near their apartment complex. When a police car pulled up and two officers exited the vehicle, Keenan got nervous.

But instead of reprimanding the children, the two officers each picked a team and joined in on the fun.

Officers Matt Kaley and Mike Passig played ball for about 25 minutes. They told KARE 11[3] that the radio was quiet so they jumped at the chance to have a little fun with the local kids. Kaley recalled:

“[It was] just a friendly game of football, and the kids loved it.”

Keenan thought this was a successful, trust building experience for the police officers – and for the kids. By engaging with the police in this friendly manner, it allows the children to trust and respect authorities.

“It’s a good feeling to know that we live in a community where police officers are willing to do this and be there for us,” said Keenan.

There’s a long tradition of police officers to do such things with kids in their communities.

It’s important to bear in mind with all the negative news out there that “most” cops are human beings. Almost all police officers are just trying to do the difficult job of protecting people in their communities from criminals.

It takes a special kind of warrior to fight bad guys all day long, every day, for very little pay and sheer hatred from certain sectors of our society. Cops ran into the Twin Towers and died on 9/11. Along with firefighters, all they could think of was saving all those people. They didn’t think of themselves at all. Such is the selfless nature of a police officer. They believe in the Constitution just as we do… they are against tyranny as well. Push comes to shove, most will do the right thing, just as most Americans will. Children should look up to the police, not hate them. They are protectors and they love a good game of catch.