Imagine taking your baby to his grandmother’s home for a visit[1] and then your ex-boyfriend won’t let you leave for five days. He took the baby from his ex and probably handed the child to his mother. He then took his ex-girlfriend into a bedroom and threw her to the floor. He then punched her in the face and stomach. He stabbed her multiple times with scissors, tried to strangle her and whipped her with an electrical chord savagely. Nice guy. You have to wonder at the mother’s poor taste in men. The mom couldn’t escape until Blaylock left the house five days later and she was able to contact her mom via a tablet computer. Her mother set her free and took them to the hospital. The baby was unharmed. The ex-boyfriend and his complicit, evil mother were both arrested and immediately screamed they were innocent. Good luck with that claim. The woman’s injuries tell a completely different story. 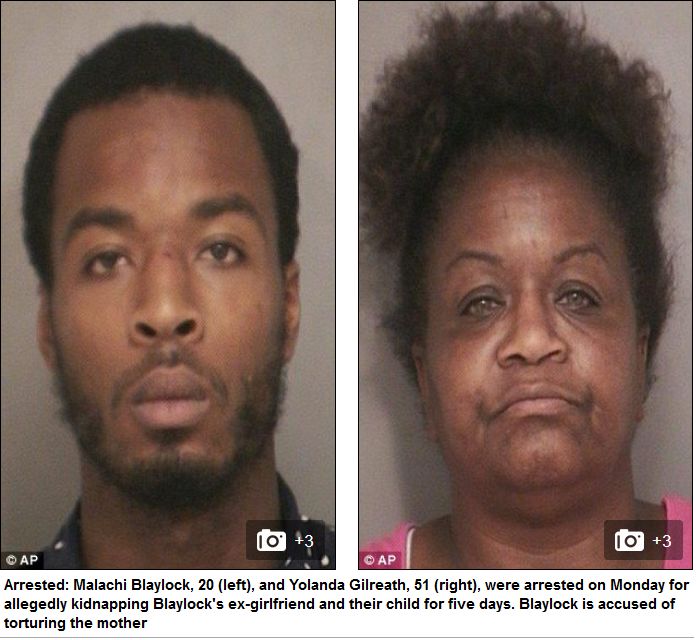 A New York man, 20, and his mother, 51, were arrested on Monday for allegedly kidnapping the man’s former girlfriend and their baby and keeping them captive for several days while the baby’s father brutally tortured his ex-girlfriend.

The 20-year-old victim and her 11-month-old son arrived at the home of the child’s grandmother, 51-year-old Yolanda Gilreath, for a visit on July 20 in Rockville Center in Long Island after Gilreath allegedly texted her to come over.

Police say that the baby’s father Malachi Blaylock met the victim and her child at his mother’s door then kidnapped the mother, stabbed her with scissors and threatened her with a gun because he was jealous of the woman’s relationship with another man. He also allegedly kidnapped her because she didn’t allow him to see his son.

Blaylock allegedly took the baby from the victim’s arms and ordered the victim into a bedroom where he held her down so she could not escape, reports NBC.

The father pushed the woman to the ground and told her she couldn’t leave; he yelled at her and punched her in the face and body, authorities allege.

She was held against her will for the next five days and Nassau County Police Inspector Kenneth Lack said she was also whipped with an electric cord, suffering cuts and bruises ‘over her whole body.’

The woman tried to escape several times but failed until she was able to call her mother from a tablet computer on Friday after Blaylock left the Hempstead home.

Her mother set her free from the house and took both her and the baby to the hospital. The child was not injured.

Blaylock and Gilreath were arrested Monday on charges including kidnapping and unlawful imprisonment. It wasn’t clear if they had attorneys who could comment on their behalf.

Gilreath denied all charges and says that she and her son did not kidnap the woman.

NBC reports that the victim already has an order of protection against Blaylock following an assault against her in March.

What kind of mother allows her son to do these vicious, nightmarish things to a woman who is the mother of her grandbaby? Just monstrous. What I would like to know is if the woman had an Order of Protection against her ex-boyfriend, why in the world would she go over there? Obviously, she knew he was violent and unhinged. That shows very poor judgement for her and the baby. Maybe she thought it was safe since it was just the grandmother she was visiting. Hard to tell, but it wasn’t. Both mother and son should go away for a very long time. The baby’s mother needs to reassess her choice in men and put her baby’s welfare first at all times. This was a horrific lesson in situational awareness and assessing individual character. It was a brutal wake-up call and she’s lucky she survived. Jealousy took her ex over the edge – he could have easily killed her.