I know this mother is scared…[1] she’s already lost one child. I feel for her. But she can’t just willy nilly blame all those who are not vaccinated for her baby contracting measles. If the child is only 15 days old, shouldn’t she have had the baby at home? Does she bear any responsibility here? As I said before, if my children were young again, I would probably get them vaccinated. But I would have to consider it long and hard after seeing the overbearing push by the CDC and pharmaceutical companies using heavy propaganda to scare parents into vaccinating their children. 100 cases of measles is hardly an epidemic. Most of it was brought here by illegal immigrants by the way. This rant by this mother is way over the top and has the feel of being scripted by globalists. 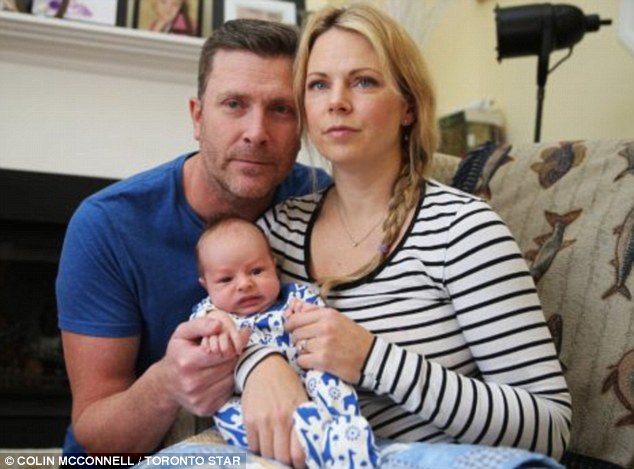 A mother has lashed out at vaccine-hesitant parents after being told her 15-day-old son may have measles.

Jennifer Hibben-White took her newborn son Griffin, who is too young to be vaccinated, to hospital for a routine check-up in late January.

Two days later she received a call from a public health official explaining Griffin had been exposed to the life-threatening disease in the waiting room in Pilkington, Ontario.

It comes just three years after Hibben-White’s five-year-old daughter Olivia died in her sleep due to an undetected blood infection.

Furious, Hibben-White, a vice-president of marketing at a private school, vented her anger in a Facebook post which has been cited as the inspiration for hundreds of parents to get their children vaccinated.

She and husband Glenn still have to wait three days for a diagnosis, and their three-year-old daughter has only had one MMR jab, which they hope will protect her.

In the post, which amassed more than 270,000 shares and ‘likes’ in just a few hours, White wrote:

‘You think you are protecting them by letting them eat their shovel full of dirt and reducing antibiotics and eating organic? You aren’t,’ she wrote.

‘And you would be the first to line up if you had an inkling of what the death of a child feels like.

‘You would be crawling through the streets on your hands and knees, begging, BEGGING to get that vaccine into your precious babies.’

She continued: ‘You think you are protecting them through extracts and homeopathy and positive thoughts and Laws of Attraction and dancing by candlelight on a full moon? You aren’t.

‘I PROTECT YOUR CHILD. We protect your child. By being concerned world citizens who care about ourselves, our fellow man, and our most vulnerable. So we vaccinate ourselves and our children.’

Since her post, White has received more than 200 messages from across the world – as far as the United Kingdom, Germany and New Zealand.

She told The Star:[2] ‘(The) messages are saying that you’ve really made me think about this issue and this issue in my family and I’ve decided to vaccinate.

‘I’m not saying anything that the scientific community hasn’t been saying for decades.

More than 100 people in California and others in several states and Mexico have been infected with measles since an outbreak traced to Disneyland was first reported in December.

A Center for Disease Control statement said that it has been dealing with a large, ongoing multi-state outbreak since the beginning of the year.

Though the vast majority of cases are in California, 18 states and Washington DC had seen cases as of Tuesday.

Political figures have weighed in on the issue of vaccination, with President Barack Obama saying that there is ‘no reason’ for all parents not to have their children immunized.

The year 2014 saw a record number of measles cases, with 644 patients across 27 states.

Last year had one major outbreak that consisted of 383 cases in the unvaccinated Ohio Amish community.

The US normally sees less than 100 measles cases a year.

She doesn’t protect my child and neither does the collective or Big Brother. That part about being a world citizen just plain creeps me out as well. The fact that she is using this to scare parents into complying, while denigrating anyone who doesn’t, is abhorrent. This article tries to make it sound like the plague and I’m not buying it. Parents have the right to choose after they have weighed all the options. It’s their children and it doesn’t take a village. I’ve had the measles – it’s not pleasant and some die from it, but let’s not make it comparable to Ebola, shall we? Autism is a real risk, as is getting the illness from the vaccination. Stop bullying parents and give them the facts. Let them make up their own minds without a totalitarian vaccine enforcement.