In yet another shooting[1], one person is dead and one is wounded. This time it is Texas Southern University in Houston, Texas. The campus was on lockdown, but that has been lifted and they say they have two possible suspects[2] in custody. This happened just a short while ago. This took place at a student housing complex adjacent to the university. Classes have been cancelled as you would expect. There was also another shooting in this same place last night or earlier today. No real solid details are being released yet. 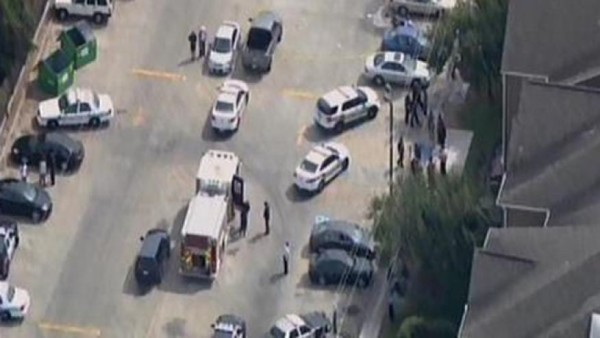 Houston authorities respond to a deadly shooting on the campus of Texas Southern University. (Fox26Houston.com)

DEVELOPING: One person was killed and another wounded during a shooting at a Texas Southern University student housing complex on Friday, and the Houston campus has been placed on lockdown, university and police officials said.

Authorities said a possible suspect is being held in shooting at the school’s housing complex. It is unclear if authorities are searching for additional suspects. The condition of the person injured is not immediately clear.

The shooting was reported around 11:30 a.m. at University Courtyard Apartments. Houston Police tweeted early Friday afternoon that a possible suspect had been detained. The tweet also said one person died in the shooting, and another person was wounded.

University spokesman Kendrick Callis said the campus is on lockdown and classes have been cancelled. Houston and campus police didn’t immediately return messages seeking comment. Police and emergency vehicles were at the scene, though no additional details were available.

The incident occurred just hours after another shooting near the same housing complex. The university said in a statement posted on its website that the earlier shooting occurred early Friday morning, and that the school was increasing police presence on campus. No other details were immediately available and it’s not clear if the shootings are linked.

The university has about 9,700 students.

It was just reported that an 18-year-old freshman college student is dead and another person is injured. Houston police say two suspects are in custody and they are looking for a third person. The two were shot in the 3500 block of Blodgett Street near Canfield around 11:30 am. The shooting happened at the Tierwester Oaks section of the University Courtyard Apartment Complex. The apartment complex is owned by TSU and is on campus property. Texas Southern University President John M. Rudley confirmed the shooting as well as the fatality and said guns are too “easily accessible.” Great, politicize this about guns and play right into Obama’s unconstitutional gun grabbing, which he is about to do by executive fiat. Never mind that these thugs would have found illegal guns somewhere or used knives. This is the third shooting on the TSU campus in the past two months and the second at this apartment complex. Let’s not blame the criminals, just go after the guns. I can’t believe this is happening.