When a mother wouldn’t discipline her son in a store, this man decided enough was enough [Video]

Oh, yes… we’ve all been there. Tell the truth – hasn’t there been a time that you’ve wanted to do exactly what this man does to this little boy? I know I have. There’s always that parent out there that is willing to let their child do whatever the heck they want and just act as if nothing is happening. Well, this is one child who will think twice about being a spoiled brat in the future. No way would we have ever let our children behave in this manner. This man deserves a standing ovation and he did the boy a favor he will never forget.[1] 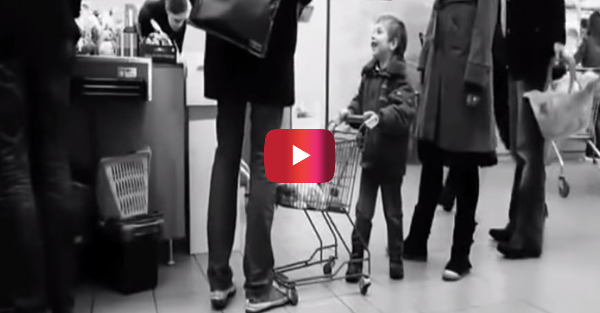 A video from October made the rounds on the Internet on Tuesday showing what happens when you don’t discipline your child.

The video, believed to be from Turkey, shows a small child slamming his kid-sized grocery cart into the leg of a man waiting in line. The boy’s mother stands by not doing anything.

After several seconds the man appears to ask the child to stop. Eventually the child begins again, and that’s when the man loses it.

As the boy’s mother continues to not do anything, the man reaches into the boy’s cart and removes some sort of liquid, which he proceeds to dump on the child’s head.

The shocked child begins to tear up while his mother picks him up and scurries away.

Let’s file this in the “I hope it’s real” category.

It looks like the gentlemen poured milk on the boy, who immediately began to cry. Instead of talking to the boy and giving him a swat, mommy whisks him out of the store like the guy is a terrorist. Well, it is Turkey, so that could be, but you get my point. She coddles the child and is not teaching him discipline or responsibility at all. No, she’s leaving the heavy lifting to utter strangers. Way to go, mom. Enough is enough and this guy did the right thing. It’s a public educational experience and one of the most important lessons this little boy will ever learn.