Salon is now actively[1] trying to get us to sympathize with pedophiles. Now that gay marriage is a fact of life and transgenders are rampaging through our restrooms, the next thing on the Marxists’ list is the acceptance of pedophilia as an acceptable sexual orientation and it is here. It’s twisted and sick. It’s depraved and abhorrent. In no way is it normal or sane to want to get it on with little kids. That these monsters are proud and unafraid now, means we are just about done for as a culture and as a society. Todd Nickerson is a pedophile who wrote a piece for Salon attempting to normalize his vile attraction to young girls, claiming pedophiles aren’t necessarily “monsters.” This video is enough to make blood shoot out of your eyes and make you reach for a gun. Not even kidding. 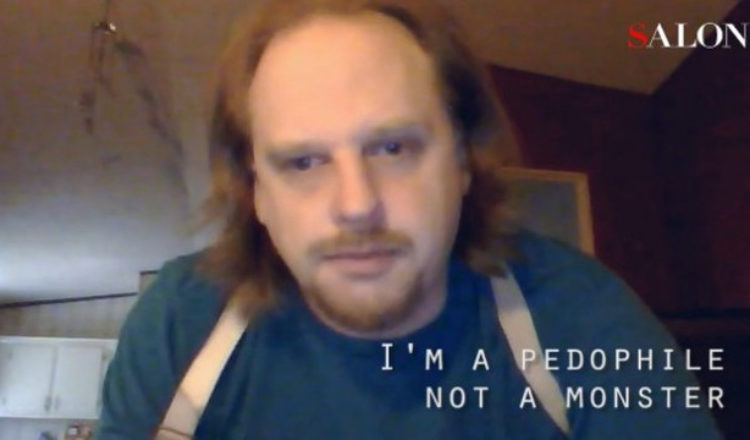 Self-described “pedophile” Todd Nickerson said that society should permit pedophiles to be “open” about their feelings in a new video for Salon[3].

Nickerson, author of a controversial essay[4] titled “I’m a pedophile, but not a monster,” published in Salon last year, said he has “never sexually abused a child” and “I never will” because he knows “the harm that it could cause” due to abuse he suffered as a child. He said his own abuse “probably contributed to my own sexuality developing.”

In the video, Nickerson described being sexually attracted to a “precocious” 5-year-old girl he babysat when he was 18. He claimed that he didn’t act on his feelings and “left town” soon after.

Nickerson said he found an online forum of pedophiles who say they don’t act on their attraction to children and lamented that “society” uses the terms pedophile and child molester “interchangeably.”

“My purpose is to go out and educate people, allowing people like myself to come out and be open,” he said. “Society makes it harder by persecuting us because a lot of us become fatalistic.”

“We start to think it doesn’t matter what we do or say, they’re going to hate us anyway,” he added.

Nickerson concluded, “We love kids and we want to protect them too.”

This pervert says that he sexually desires children, but has never and will never molest them. Bull crap. This man is a predator and should be locked away. Not only does Nickerson talk about getting turned on by a five year-old, he relates how he had to ‘relieve himself’ in a bathroom while babysitting her. Not long ago, someone like this would have been hunted down and dealt with by parents. Now, he feels free to write essays on Salon and express his deviant desires while proclaiming them as ‘normal’. Nickerson said he found an online forum of pedophiles who say they don’t act on their attraction to children and lamented that “society” uses the terms pedophile and child molester “interchangeably.” “I’ve gotten to know a lot of pedophiles online,” Nickerson added. “My sense is that we’re a much larger group than society actually thinks we are.” Of that, I have no doubt. You watch, this is the next new front after the transgender issue. Our children and families are in grave danger and we had better put a stop to this evil before it is too late.