This is a brutal video.[1] It shows a pack of Muslim men hunting gays in Berlin and beating them mercilessly. One fled to a taxi and was beaten with clubs as he jumped into the vehicle. This is what the Muslim rapefugees bring with them. This is Sharia law and these are morality gangs who prowl the streets to punish those who violate their laws. It’s ironic since pedophilia is condoned in their religion. But nevertheless, they consider adult homosexuality a sin punishable by death. Now, Germany is experiencing this first hand and murders will not be far behind. No one seems to be standing up to these beasts there. The Russians are, but they are the only ones I have seen aside from some vigilante groups that are doing anything to stop this. It’s barbaric. 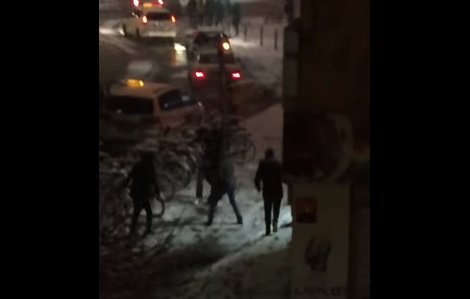 Brutal hunt at the Kottbusser Tor in Berlin

Two homosexual men were chased by a bunch of migrants at the Kottbusser Tor. Two days ago, the Tagesspiegel did report about the escalating situation at Kottbusser Tor in Berlin, but they left out essential details.

Only now it’s been discovered through a single remark in the Tagesspiegel, that three weeks ago at the Kottbusser Tor in Berlin Kreuzberg two gay men were chased and beaten with belts by an angry mob of arabic speaking men. On the video one can hear how the two men scream in panic.

In the Tagesspiegel it was reported that, “in the past months it has become a daily occurrence that people are being surrounded, during which wallets, cell phones and hand bags are being stolen. If that won’t work, people are being beaten, sprayed with irritant gas, or knives are brandished. Several women are groped on their private parts, or beaten in the face – as happened two weeks ago. Or the victims would be chased hundreds of meters – as happened three weeks ago as an angry mob chased and beat two gay men with belts and kicking them as the two men were screaming in panic. There is a video of the incident.”

The voices in the video of the person filming are commenting the event in turkish and they’re speaking of arabic men participating in the incident. That is why one can assume the offenders all have a migrant background.

The men were using long pipes or sticks as bludgeoning clubs. Once again, this happened at a Berlin train station. This evidently involved two men and their attackers also used belts on them. It is now a daily occurrence where people are ripped off by these Muslim gangs and beaten for various reasons. Women are groped, raped and beaten constantly. Germany has turned into a deviant cesspool thanks to Angela Merkel and the Hijrah migration. At the beginning of the year, the speaker for the “Gay Museum” in Berlin remarked how the gay scene around that train station was a great example of the integration of queer people into a multicultural society. Really? You might want to send the memo to the Muslim refugees that are there beating them now. It’s amazing to watch a country fall to the Islamists from within. I fear America may face the same fate.