The Student Body President[1] Desmond Miller and EMU President Susan Martin get an ‘A’ in dhimmitude and cowardice[2]. They caved in record time when approximately 35 students (all either Muslims or useful idiots) stormed the stage during a showing of American Sniper. Chris Kyle was a genuine American hero and the greatest military sniper in history. He was known for taking down our enemies… now our enemies, who have infiltrated our universities, are taking down America. 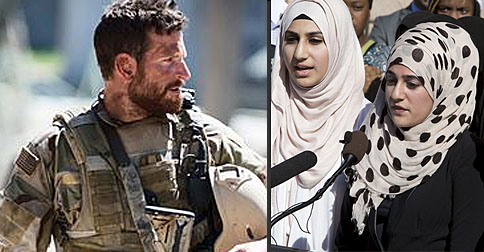 Muslim students continue to wage jihad against one of America’s most admired war heroes, using protest and intimidation to shut down showing of ‘American Sniper’ on college campuses.

Earlier this month the U. of Michigan cancelled a showing[3] after Muslims called the subject of the record-breaking film, the late Chris Kyle, a “racist” and “mass killer” — only to reverse themselves after a huge outcry[4] that included their new football coach Jim Harbaugh.

But during the first showing, four protesters climbed onstage[5] at the Student Center Auditorium chanting anti-American slogans and demanding the screening be stopped. The four were briefly arrested:

Four students at Eastern Michigan University (EMU) were arrested Friday after disrupting and causing the cancellation of a screening of American Sniper.

The Echo, EMU’s student newspaper, reported that roughly 35 students walked onto the stage at the Student Center Auditorium in protest during the 8P.M. screening of the Academy Award-winning film. The group of students worked together to try to shut down the 8:00 p.m. and 10:00 p.m. screenings of the film about the deceased Navy SEAL sniper Chris Kyle.

“The reality is, this is about a process of not allowing cultural appropriation for the movies being allowed into the university.”

This idiot progressive Islamist doesn’t even understand his own liberal claptrap. So-called “appropriation” is when White people anger ethnic activists by wearing a turban, or sombrero. All American Sniper portrays is Chris Kyle killing the enemy. But if you support that enemy over America, that certainly might upset you.

Protest leaders Ahmed Abbas, Layali Alsadah, Jenna Hamed, and Sabreen Dari were arrested after attempting to shut down the 8 P.M. screening. The protesters were successful in getting the 10 P.M. screening cancelled.

How were they “successful”? By getting surrender monkeys who run the school to knuckle under, which they did:

Student Body President Desmond Miller, the decision to cancel the second showing was a joint-decision he made with EMU President Susan Martin: “The conversation we had wanted to make sure student safety was at the forefront. We wanted to make sure whatever happens, students would be safe. The second part of it, which is actually just as important as the first part, was making sure we have a very serious dialogue about the movie and the propaganda associated with this movie,” Miller told The Echo.

Completely caved to violent intimidation (“student safety”) and Islamofascist ideology — accusing the film itself of propaganda, instead of the anti-American Muslim students themselves.

Want to give EMU President Susan Martin a piece of your mind?

I would definitely give Susan Martin a call and/or an email and voice your opinion here. Calling American Sniper propaganda is just unacceptable and totally unpatriotic. It’s bad enough they backed down in the face of violent intimidation… I’d hate to see what they did in a real battle with weapons. They would probably cower in a corner, pleading for the Muslims not to hurt them and wet themselves. It reminds me of the mayor in Red Dawn who threw his support behind the Russians to save his own worthless hide. That didn’t work either. So, these Student Body and University leaders champion Islamofascists and kneel before our enemy. That’s a heck of a lesson to teach at the college level. It’s Surrender 101 and just pathetic in the extreme.